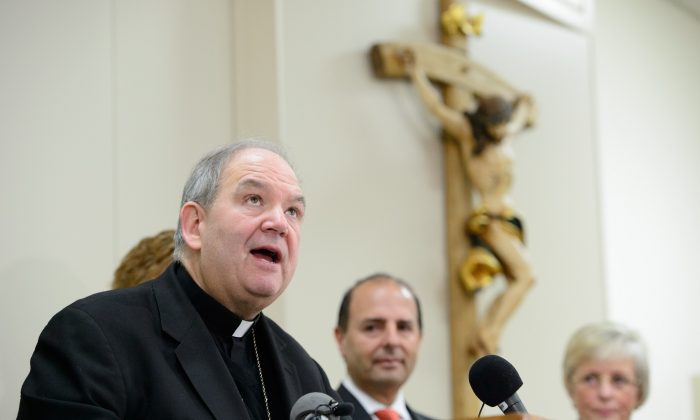 Archbishop Bernard Hebda speaks about the settlement reached between Ramsey County prosecutors and the Archdiocese of St. Paul and Minneapolis at a news conference in St. Paul, Minn., on Dec. 18, 2015. The Archdiocese of St. Paul and Minneapolis reached a settlement with Ramsey County prosecutors in a civil case that alleges it failed to protect children from sexual abuse. A criminal case that accuses church leaders of repeatedly ignoring misconduct by a former priest is ongoing. (Glen Stubbe/Star Tribune via AP)
US

SEATTLE—The Archdiocese of Seattle has published a list of 77 child-sex abusers who served or lived in Western Washington over the past several decades.

Seattle Archbishop J. Peter Sartain apologized for the actions by the nearly all-male list of priests, brothers and deacons, and at least one sister, who abused minors. He said in a letter released Friday that he is disclosing the names “in the interest of further transparency and accountability” and to continue to encourage victims of sexual abuse by clergy to come forward.

“Our work in this area will not be complete until all those who have been harmed have received assistance in healing, and until the evil of child sexual abuse has been eradicated from society,” Sartain said.

Our work in this area will not be complete until all those who have been harmed have received assistance in healing, and until the evil of child sexual abuse has been eradicated from society.
— J. Peter Sartain, Seattle Archbishop

The list includes cases where allegations of child sex abuse have been admitted, established or determined to be credible. The list took nearly two years to develop with the help of independent consultants and a review board of professionals who advise the archbishop on child sex abuse.

Sartain said the archdiocese has made efforts to respond to victims since the mid-1980s and thanked abuse survivors who have come forward.

Seattle attorney Michael T. Pfau and his law partner, Jason P. Amala, have settled more than 150 claims against the Seattle Archdiocese and others that operated its schools and parishes in and around Seattle. Many of the claims involved people on the list.

“Many of our clients believe they were the only one, or they think they will not be believed if they come forward,” he said in a news release. “This list will help people realize they are not alone, which is often the first step toward healing and closure.”

Pfau also called on the Archdiocese, for “true transparency,” to release the files and secret archives kept on the people named, saying other Archdioceses have done so.

“Releasing the files allows abuse survivors to begin to understand how it happened, which can be another important step toward finding closure,” he said. “It also helps the general public to understand the magnitude of the problem, and to ensure this never happens again.”