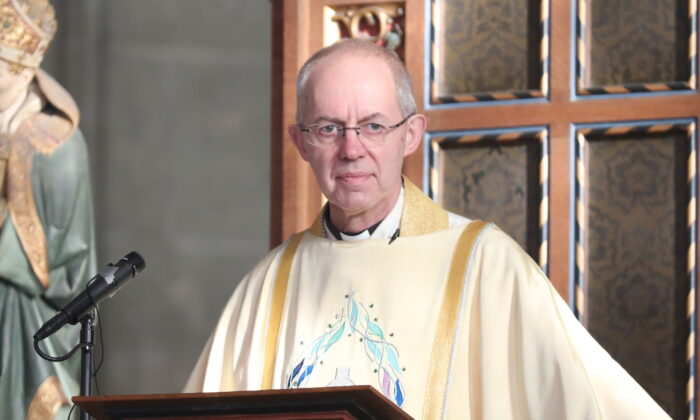 Archbishop of Canterbury Justin Welby apologised on June 16 after research (pdf) found links to the 18th-century transatlantic slave trade in a Church of England predecessor fund.

Welby said he’s “deeply sorry” for the links, calling it “a source of shame.”

Research commissioned by the Church Commissioners for England found that “significant amounts” of the Queen Anne’s Bounty, a fund set up in 1704 to augment the salaries of the poor clergy, were put into the South Sea Company, which “traded in enslaved people,” the charity said on June 16.

It also said the fund has “received numerous benefactions, many of which are likely to have come from individuals linked to, or who profited from, transatlantic chattel slavery or the plantation economy. ”

Founded in 1711 to refinance England’s national debt, the South Sea Company was awarded the monopoly on Britain’s trade of enslaved people to the Spanish Americas.

The church’s recently published report estimated that the South Sea Company transported a little over 34,000 slaves “in crowded, unsanitary, unsafe, and inhumane conditions” during its 30 years of operation.

By the time the South Sea Company ceased its slaving activities in 1739, Queen Anne’s Bounty had accumulated investments in annuities with a value of around £204,000 (equivalent to about £443 million today).

This income helped Queen Anne’s Bounty fulfill its purpose of supplementing the income of poorer clergy, and was likely reinvested, contributing to the overall accumulation of Queen Anne’s Bounty’s wealth, the research paper explained.

“This abominable trade took men, women, and children created in God’s image and stripped them of their dignity and freedom. The fact that some within the Church actively supported and profited from it is a source of shame,” he added.

Calling it “a moment for lament, repentance, and restorative action,” Welby said he prays for “those affected by this news” and hope to “work together to discern a new way forward.”

Bishop of Birmingham David Urquhart, a Church Commissioners board member and chair of the group that had oversight of the research, also apologised over the findings, and said the charity “will use this knowledge to ensure we are at the forefront of responsible investment globally.”

He also said the commissioners “continue to lobby for change in the companies in which we invest today and call for those companies to champion human rights within their supply chains.”

“Through our policy of advocating ‘respect for people,’ we aim to create a fairer world today in which all of God’s children can flourish,” he said.

The Church Commissioners was formed in 1948 by merging two bodies, Queen Anne’s Bounty and the Ecclesiastical Commissioners.

Following decades of anti-slavery campaigns by the Quaker abolitionists and some other Christian evangelical groups, the British Empire made trading slaves illegal in 1807, before eventually abolishing slavery by compensated emancipation.