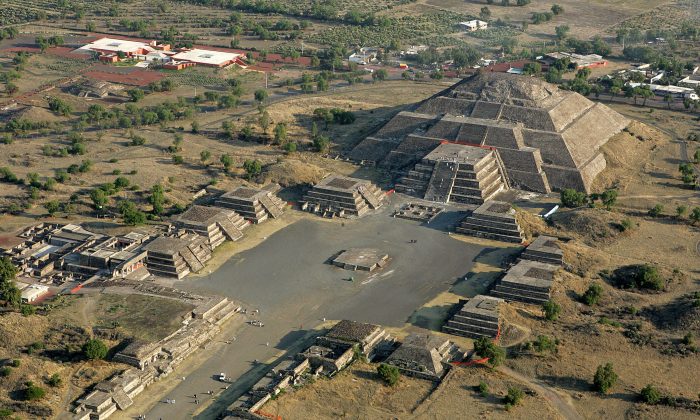 An aerial view of the Moon Pyramid in Teotihuacan, Mexico, on March 21, 2007. (Luis Acosta/AFP/Getty Images)
Science

Remains of captive carnivores were found in the excavation of what was once one of the largest cities in the world.

The puma, eagle, and wolf remains were found in Teotihuacan, which was one of the largest and most powerful urban cities in the world between the first and sixth centuries A.D.

Scientists say in the PLOS ONE study that the puma, eagle, and wolf remains appear to push back the date that humans first began to use carnivores to establish their place on the social ladders some 1,000 years.

Carefully inspecting the bones, the authors of the study were able to find bone breaks and evidence of stress characteristic to captive animals—for example, three eagle skeletons showed stress on the lower part of the legs, where they may have been tied to a perch.

Isotope analysis provided further support to the theory. The technique primarily features the study of elements present in organic remains, and certain isotopes make their way into the bones based on food and drink. Analysis of the bones revealed high levels of carbon isotope C4, which is present in corn or maize and not likely to be eaten by wild carnivores.

“These results push back the antiquity of keeping captive carnivores for ritualistic purposes nearly 1000 years before the Spanish conquistadors described Moctezuma’s zoo at the Aztec capital,” the authors wrote in the study abstract.

“Mirroring these documents the results indicate a select group of carnivores at Teotihuacan may have been fed maize-eating omnivores, such as dogs and humans. Unlike historical records, the present study provides the earliest and direct archaeological evidence for this practice in Mesoamerica.”

Nawa Sugiyama of the Smithsonian Institution and Margaret Schoeninger of the University of California, San Diego, published the study.