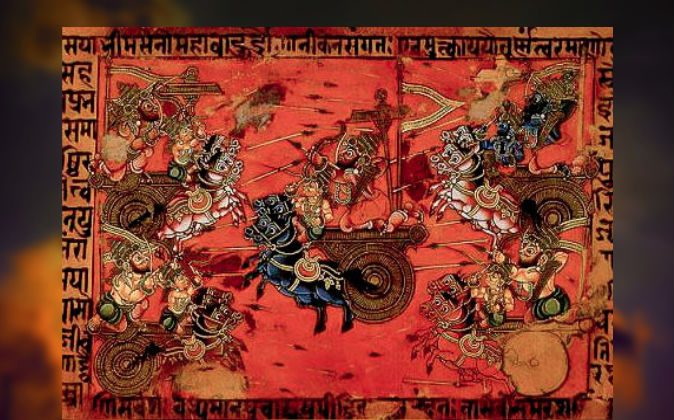 Manuscript illustration of the Battle of Kurukshetra from the Mahabharata. (Wikimedia Commons) Background: (PinkBadger/iStock/Thinkstock)
archaeology

One of the distinguishing features of the WWI was the widespread use of chemical weapons. Chemical gases of various lethality, including mustard gas, phosgene, and tear gas, were used to disable and kill enemy defenders. Although chemical weapons played a major role during the Great War, their usage can be dated to a much earlier period of history.

One of the earliest references to the use of chemical weapons in Western literature can be found in the Greek myth of Heracles, in which the hero dips his arrows in the blood of the Hydra to make them toxic. It has also been claimed that poisoned arrows were mentioned by Homer in both his epics, the “Iliad” and the “Odyssey.”

Records of the use of chemical weapons also appear in the ancient civilizations of the East. In India, for instance, the use of poisons during warfare can be found in both the “Mahabharata” and the “Ramayana,” two major Sanskrit epics dating from about the 4th century B.C. Moreover, recipes for poisonous weapons can be found in Kautilya’s “Arthashastra,” which dates to India’s Mauryan period (322–185 B.C.).

In China,writings describe the use of toxic gases by defenders of a city. The toxic fumes, produced by burning balls of mustard or other toxic vegetables, are pumped into tunnels dug by a besieging army using bellows.

Returning to the Western world, the use of poisonous fumes may be traced to the Peloponnesian War, which took place during the 5th century B.C. During one of the battles between the Spartans and the Athenians, the former burnt a mixture of wood, pitch, and sulphur under the walls of the latter, hoping that the fumes would incapacitate the defenders, and thus disable their ability to resist the Spartan assault.

The examples provided thus far have been obtained through the surviving literary evidence. For the earliest available archaeological evidence of the use of chemical weapons, however, one would need to look at the site of Dura-Europos, which is located on the bank of the Euphrates River in Syria. Dura-Europos was a Roman city which fell to the Sassanians around the middle of the 3rd century A.D.

Although there are no literary records detailing the final siege, archaeology provides a clue as to what happened. Dura-Europos was excavated during the 1920s and ’30s by French and American archaeologists. Among the features found were mines, one dug by the Persians and another dug by the Romans as a counter. In addition, the piled bodies of at least 19 Roman soldiers and a lone Sassanian soldier in the tunnel were also found.

The initial interpretation was that a fierce battle ensued in the tunnel, where the Sassanians successfully repelled the Roman defenders. After the battle, the Sassanians destroyed the counter-mine by setting fire to it, as evidenced by the presence of the sulphur crystals and bitumen in the tunnel.

In 2009, a re-examination of the evidence led to a re-interpretation of events. As the tunnels were too narrow for effective hand-to-hand combat, doubts were cast on the established interpretation. Furthermore, the position of the Roman bodies, stacked deliberately into a pile, suggests that this was not the place where they fell. The alternate interpretation, as suggested by Professor Simon James, an archaeologist at the University of Leicester, was that the Sassanians employed toxic gases to kill the Roman defenders. When sulphur and bitumen were thrown onto a fire, it became a choking gas, and turned into sulphuric acid when inhaled by the Roman defenders. Within minutes, the Romans who were in the tunnel were dead.

This happened when the Sassanian mine was broken in by the Romans, whose counter-mine was right above theirs. The lone Sassanian soldier may have been a victim of his own weapons, and died of the poisonous gasses as well. Once the tunnel was cleared, the Sassanians stacked the Roman bodies at the mouth of the counter-mine as a shield wall, and proceeded to destroy this mine so they could resume their sapping work.

The archaeological finds at Dura-Europos reveal that chemical warfare was already in use during ancient times, and provides the first physical evidence that the literary sources lack. How often such chemical weapons were used is another question. Is Dura-Europos a unique example of the use of chemical weapons, or were such weapons more widely used? Perhaps more archaeological evidence will emerge that to provide an answer.