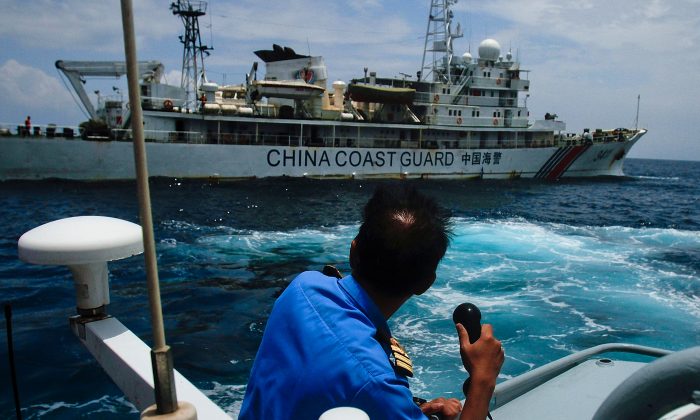 Chinese "little blue men" maritime militia in South China Sea. A member of the Malaysian Navy at a communication exchange with a Chinese Coast Guard ship in the South China Sea, near Kuantan, Malaysia, on March 15, 2014. (Rahman Roslan/Getty Images)
China

When it comes to the hotly-disputed waters of the South China Sea, Beijing has never been one to make any concessions on its claims—supposedly based on historical right—to nearly the entire sea fed by the trade chokepoint at the Strait of Malacca.

And faced with mounting international opposition, China seems desperate to generate a veneer of support to lend an air of legitimacy on its claims.

In an ongoing international legal arbitration, Filipino authorities and legal experts have argued repeatedly that the Chinese claims are no older than 2009, when the communist regime pushed out an oft-referenced “nine dash line” that infringes on the existing holdings or claims of no less than six Southeast Asian countries.

The arbitration is being handled in The Hague and is expected to produce a verdict in Manila’s favor in the upcoming ruling on July 12.

China has vowed to ignore The Hague’s ruling, but there are indications that the arbitration comes as a dangerously solid challenge to its fabricated narrative.

The consolidation of opposition to Chinese expansion seems to have kicked the communist propaganda machine and China’s diplomatic efforts into overdrive. Chinese state-run mouthpieces have already dismissed the proceedings as a “farce,” and pushed to rally support across borders.

A search in the opinion section of the English-language edition of China Military Online, the Chinese People’s Liberation Army (PLA) official news publication of for “South China Sea” returns nearly 40 results out of the 80 articles on the first page of stories. Of these, 10 articles appear with “arbitration” in their headlines, the earliest of which calls the legal action a “unilateral” and “unlawful” move by Manila.

The intense media campaign appears to be part of a larger group of operations China is carrying out to sway perceptions in its favor.

Disinformation is a long-standing strategy used by communist regimes to sway or divert opinion at home and abroad. In communist Chinese doctrine, this is known as the “Three Warfares”—media warfare, legal warfare, and psychological warfare. It is used to disorient and divide adversaries through various forms of subversion.

At a June 23 meeting in Tashkent, multiple member states of the Shanghai Cooperation Organization, which is an economic bloc led primarily by China and Russia, expressed support for China in the South China Sea.

But a closer look at the public relations game Beijing is playing suggests a pitiful facade rather than a potent bloc. In light of the Southeast Asian and American partnership that is being put together around the Chinese threat, with the successful arbitration furthering cementing the coalition, China’s disinformation appears to fall flat.

Katsuji Nakazawa, of the Japanese financial paper Nikkei, described the flimsy or ad-hoc collection of nations purported to side with China on the South China Sea dispute. The majority of China’s supporters are faraway African countries or Central Asian states with little stake or influence in Southeast Asian waters—and even then, explicit endorsements are few.

“Those who have actually been shown making favorable comments about China are limited to officials of political parties in countries that have no direct interests in the South China Sea,” Nakazawa writes in a July 1 article.

It is the support of Russia that Beijing appears to covet most. At the end of June, Russian president Vladimir Putin met with Chinese Communist Party leader Xi Jinping twice in quick succession—once at the Tashkent summit, and again on June 25 in Beijing, reportedly at “strong request” from the Chinese side.

While neither Putin nor the Russian government has backed China openly, Nakazawa says Beijing wants to use the meetings to create an impression of agreement between the world’s largest countries by size and population.