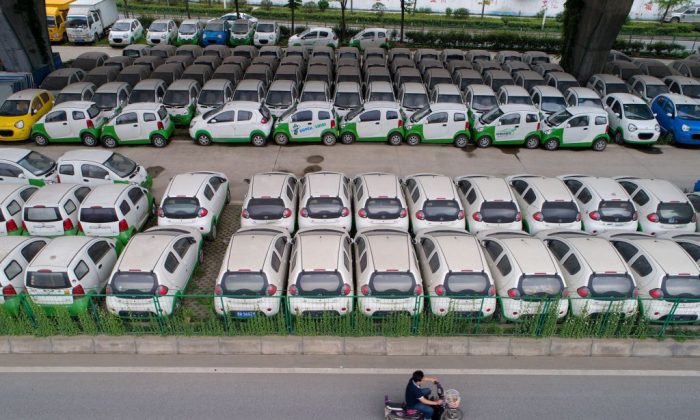 China, a nation of bike riders, is now becoming a nation of e-bike and low-speed electric vehicle (LSEV) drivers. Since these light e-vehicles became a popular form of transportation, many owners complain they are given indiscriminate fines by the authorities.

Starting in March, various Chinese media reported that many local governments started a so-called special workforce to rectify the field of LSEV—including both three-wheeled and four-wheeled electric vehicles.

Three drivers told the Chinese edition of The Epoch Times their personal experiences with the chaotic official program. They explained that arbitrary fines, confiscation of vehicles, revocation of licenses, and seizure of businesses, have become frequent.

Mr. Ren, from the southeastern coastal province of Fujian, said that plans were launched one after another. He believes that income from the fines, issued under various excuses, are one of the main purposes. The fines target all businesses and entities, “Everything else is just an excuse,” he said.

Ms. Liu from Beijing has had five three-wheeled LSEVs confiscated by the authorities. Her husband, has a business of providing local transportation services using the e-vehicles.

She said, “We have had our vehicles impounded by the officials since 2013. We were told that we need a license plate, but they won’t provide one.”

Her husband has been driving the vehicles without a plate, and is fined whenever he’s caught.

Liu said that the officials have been robbing them in the name of law.

“They don’t even bother to give you a piece of ‘post-it.’ These hooligans just rob you,” she said, referring to the fines they paid without getting a receipt from the police.

In China today, people are often the victims of “post-it,” also known as Bai-Tiao, that is, a piece of scratch paper. Officials often use it as a form of receipt, but it does not carry the name of the issuing entity, purpose, date, or official stamp. It’s up to the authorities to decide if they will recognize what’s hand-written on a Bai-Tiao.

Liu does not believe the officials’ claims that they dispose of confiscated vehicles. She said the officials just sell them as second hand, and keep the money for themselves, “They are entitled by their authority to do whatever they want even if it’s illegal,” she said.

Ms. Bai from Hebei Province, said that local officials have stipulated that LSEV owners must apply for a license plate, but only the ones that meet the national standard are qualified to receive a license.

However, the national standard for qualified LSEVs is not published yet.

In 2019, Beijing publicly solicited opinions on a national standard for LSEVs. Chinese media suspected that the national standard will be issued in September this year. It’s believed that there’ll be a transition of three to five years to reinforce the new standard of specification for a qualified LSEV.

However, various local governments have already started local fines and inspections of the industry.

For example, the local traffic patrol of Hong’an County, Hubei Province, is carrying out a special action between April 6 and Dec. 31 this year, targeting LSEVs that fail to meet the national standards.

Also, starting on June 6, 2022, riders of unqualified LSEVs will receive a warning on the the first instance of being stopped, followed by towing of the vehicle, and then confiscation of the vehicle, the media reported.

Human rights lawyer Chen Guangcheng said that Beijing’s policies are actually a battle of interests among Chinese companies owned by the elites of the Chinese Communist Party.

The so-called “national standard” is just the authorities’ game of words, he said.

Activist Lin Shengliang, a Shenzhen resident, said the massive market of LSEVs in China carries huge interests, and the officials were eyeing potential taxes, and that’s why local officials started to harass riders about license plates.

Lin said, “All the stipulations on the LSEV are about money and politics. Following the fines and confiscation are taxes that come with the [buying] license plates, namely, the money.”