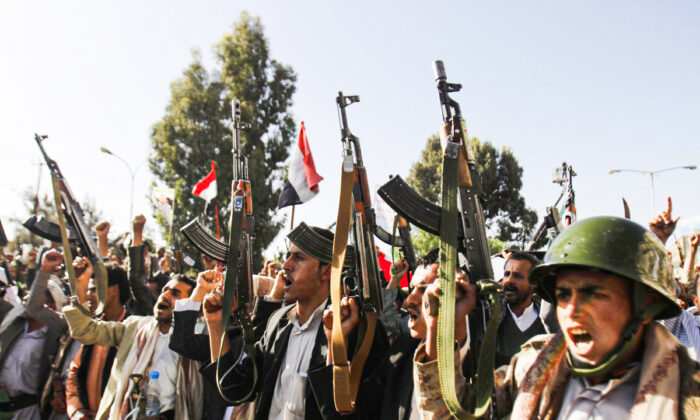 Shiite rebels, known as Houthis, chant slogans during a demonstration against an arms embargo imposed by the U.N. Security Council on Houthi leaders, in Sanaa, Yemen, on April 16, 2015. (Hani Mohammed/AP Photo)
Middle East

The Iran-aligned Houthi movement that controls most of northern Yemen has hijacked a United Arab Emirates-flagged cargo ship off the Yemeni port city of Hodeidah, according to TV channel Al Arabiya.

The cargo ship Rawabi is carrying medical equipment for a Saudi hospital on Socotra Island, according to Al Arabiya, citing an Arab coalition spokesperson.

The coalition on Jan. 3 urged the Houthis to immediately surrender the ship and said it will take all necessary measures to deal with the “piracy,” according to the report.

The United Kingdom Maritime Trade Operations (UKMTO) said late Jan. 2 in an incident notice that it had received reports of an attack on a vessel near Yemen’s port of Ras Isa. An investigation is continuing, UKMTO said.

The organization placed the vessel at approximately 23 nautical miles west of the Ras Isa marine terminal.

The alleged hijacking comes amid ongoing tensions between the Houthi movement and the Saudi-led Arab coalition in Yemen, which has been leading a military alliance against the Houthis for more than six years in an effort to restore the internationally recognized government of President Abdrabbuh Mansour Hadi following a coup by the Houthi rebels in 2015.

The alliance has said it foiled a number of attacks on shipping vessels in the Red Sea, one of the world’s busiest maritime lanes extending southeastward from Suez, Egypt, to the Bab el-Mandeb Strait that connects with the Gulf of Aden.

The latest incident near Ras Isa comes after the Houthi movement in 2019 briefly seized a Saudi-flagged ship and two South Korean vessels.

Last month, the Arab coalition said that Houthis had fired 430 ballistic missiles and 851 armed drones into Saudi Arabia since the war started in 2015, killing 59 Saudi civilians in total.

Gen. Turki al-Maliki, spokesman of the Saudi alliance, claimed on Dec. 26 that the Houthi movement had been using Sanaa airport in Yemen’s capital as a base to launch attacks on the kingdom. The Houthis have denied the allegation.

He also showed another clip that he said showed an alleged member of the Lebanese terrorist group Hezbollah placing explosives in a drone and a man he identified as a Hezbollah official telling Houthi members “we must strengthen our ranks.”

The spokesman said the international community must “stop hostile acts by this terrorist organization.”

The Epoch Times has been unable to independently verify the video footage.

In February 2020, the Biden administration removed the Houthis from its foreign terrorist watch list and announced it was ending U.S. support for the Saudi-led coalition’s operations in the region, amid what the United Nations has called “the world’s worst humanitarian crisis.”

“This decision is a recognition of the dire humanitarian situation in Yemen,” Secretary of State Antony Blinken said at the time. “We have listened to warnings from the United Nations, humanitarian groups, and bipartisan members of Congress, among others, that the designations could have a devastating impact on Yemenis’ access to basic commodities like food and fuel.”

“The revocations are intended to ensure that relevant U.S. policies do not impede assistance to those already suffering what has been called the world’s worst humanitarian crisis,” Blinken said. “By focusing on alleviating the humanitarian situation in Yemen, we hope the Yemeni parties can also focus on engaging in dialogue.”