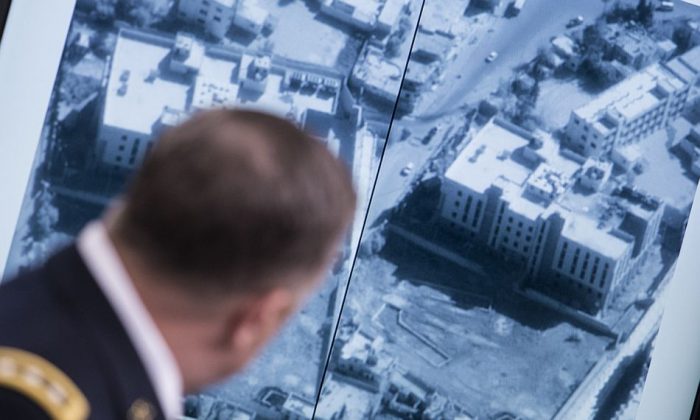 Lt. Gen. William C. Mayville Jr., joint staff director of operations, shows before and after photos of the airstrikes in Syria during a briefing at the Pentagon on Tuesday. (Brendan Smialowski/AFP/Getty Images)
US

Suddenly the story changed. On Tuesday, the Khorasan Group upstaged ISIL, which had previously upstaged al-Qaeda. According to the White House, Khorosan “seasoned al-Qaeda operatives in Syria” were planning imminent attacks on the United States and Europe. Multiple air strikes overnight Monday aimed at both groups.

President Barack Obama said from the White House that the strikes in Syria are part of the U.S. campaign to deliver one message on ISIL: “They will find no safe haven.”

Obama praised the countries that he said are rejecting Islamist extremism. “The people and governments of the Middle East are rejecting ISIL, and standing up for the peace and security that the people of the world deserve. Not since the Gulf War has the United States been joined in direct military action by such a broad coalition of Arab partners.”

Bahrain, Jordan, Saudi Arabia, Qatar, and the United Arab Emirates are among the allies who “undertook military action against ISIL terrorists in Syria overnight,” according to a U.S. Central Command news release.

“It’s very interesting that five countries worked with us,” said former U.S. Ambassador to the United Nations Nancy Soderberg. It’s the first time since the invasion of Kuwait, she said.

“The threat of ISIS is a danger and we have to confront it.” There are two sides to the equation, according to Soderberg. She was the third ranked official at the National Security Council during the Clinton administration.

On the Iraq side, America will have a variety of troops there to train and strengthen Iraqi soldiers “so they don’t run away,” as they did when ISIL invaded. On the other hand, “the Kurds are always great.”

“The trickier part is Syria.” She thinks it will be necessary to work with Syrian regime head Bashar al-Assad, because none of the so-called moderate opposition groups are strong enough to both overthrow him and repel Islamist groups, in her analysis. He will need to be dealt with later.

The initial bombardment was heavy. It started with 47 Tomahawk Land Attack Missiles, launched from U.S. ships in international waters in the Red Sea and North Arabian Gulf. On top of those, “U.S. Air Force, Navy, and Marine Corps fighters, bombers and remotely piloted aircraft deployed to the U.S. Central Command area of operations participated in the airstrikes,” according to a Pentagon news release. The strikes came in three waves. More are likely to come.

“Part of the success of air campaigns is the element of surprise,” said international security expert Max Abrahms. “They knew the U.S. was coming but did not know when—an element of shock and awe.” Abrahms teaches public policy in the department of political science at Northeastern University in Boston, and is a member of the Council on Foreign Relations.

The sudden prominence of the Khorosan Group also had an element of surprise. “The Khorosan Group seemed to come out of nowhere,” said Abrahms. It seems it first came into the news last week. The context was that Director of National Intelligence James Clapper said ISIL might not be the biggest threat to the homeland.

On the other hand, “I think we should not make too much of the boundaries of these groups,” said Abrahms. They are fluid, and people pass back and forth among them. But the Khorosan Group is different from the others, because it was basically implanted in Syria by al-Qaeda. The purpose was to give it refuge with NUSRA, another al-Qaeda affiliate.

The reason to worry is this: The Khorosan Group has ties with AQAP, al-Qaeda in the Arab Peninsula. It is the most internationally minded of the terrorist groups, according to Abrahms.

AQAP has Ibrahim Hassan Tali al-Asiri, a former chemist and highly skilled bomb maker. He was linked to the “underwear bomber,” Umar Farouk Abdulmutallab, who tried to bring down a plane over Chicago on Christmas Day, 2009.

Asiri has the skill to develop undetectable bombs, according to Abrahms. AQAP and Khorosan want to strike inside America. “The fear is that Asiri may have passed on a bomb to the Khorosan.”

Abrahms said he is a little bit suspicious when a U.S. official says a threat is “imminent but not specific.” Yet the way jihadi have been congregating and talking about attacking America is like what happened before 9/11.

“I tend to think these groups are quite serious,” he said.