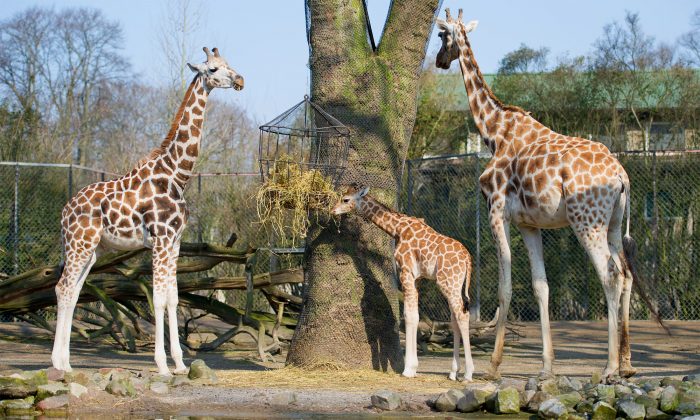 April the Giraffe, whose last pregnancy and birthing were live-streamed on April’s own web page, is expecting again.

Jordan Patch, the owner of Animal Adventure Park, where April lives, announced on Good Morning America on Nov. 9, that he could not confirm or deny another pregnancy.

“April was cleared for pregnancy about a month ago and we’ve been letting nature take its course,” Gallagher said, according to CBS News.

“I can only confirm what Jordan said on GMA (Good Morning America), that we cannot confirm nor deny that April is pregnant,” she added.

People followed April’s progress through the last 65 days of her 15-month pregnancy and watched the birth of Taijiri live on April 15, 2017.

Happy 6 months to our "not so little" Tajiri!
He is standing just shy of 10' tall!
Thank you to his fans for your following and support. pic.twitter.com/ePTlQ662iB

If April is pregnant again, this would be her fifth calf. She has never had a miscarriage or a still birth. Giraffe births are considered important events throughout the zoo community as giraffes are categorized as “vulnerable to extinction” on the International Union for Conservation of Nature (IUCN) Red List, and their number has decreased by about 40% in the last three decades.

According to April’s web page, there are only 100,000 giraffes left in the wild today, divided into four species.

Animal Adventure Park is part of the Species Survival Plan (SSP). This program, started in 1981 by the Association of Zoos and Aquariums, seeks to maintain genetically diverse and demographically stable populations of animals that are endangered in the wild.

Species are added to the SSP list when it is determined that their best chances for survival lie in a captive breeding program.

A quick check in from our end!

All is well and we have a cute shot of mom and baby enjoying breakfast!
"Baby" has quite the personality! pic.twitter.com/2UkAnfpAcw

Eventually young Taijiri will probably join the program to help other zoos expand their giraffe populations with an outside source of DNA.

Animal Adventure Park, located in Harpursville, New York, is a petting and feeding zoo boasting some 49 species of mammals and 19 species of birds. Not every animal can be petted or fed—the wolves and black bears are not quite as visitor-friendly.

We are excited for Sunday!
Special Treats for Mom & Dad Giraffes at 12 Noon!
BBQ meal – $8 While they last!
(First 50 dads enjoy it Free!) pic.twitter.com/YfXSX6X4Yc