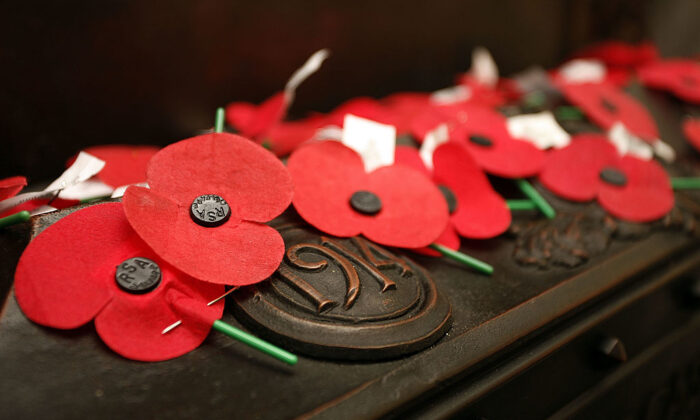 Remembrance poppies cover the shrine inside the Cenotaph in Wellington, New Zealand, on April 25, 2011. (Hagen Hopkins/Getty Images)
Thinking About China

April 25: Remembering Sacrifice and Service for a Greater Good

On April 25 two significant events stand out. They have parallels, yet occurred at different times, in different countries and involved different peoples—Australians, New Zealanders, Turks, and Chinese.

What happened on April 25, 1999, in Beijing is not widely known. Yet it is a significant day of remembrance for millions of people in China and around the world who practise Falun Dafa (Falun Gong), a spiritual practice in the Buddhist tradition based on meditation and the principles of truthfulness, compassion, and forbearance.

Falun Gong was first taught to the public in China in May 1992 by Mr. Li Hongzhi and became immensely popular due to its health and moral benefits. In 1993, the Public Security Bureau invited Li to give a seminar on Falun Gong at the bureau office. In March 1995, Li was invited by the Chinese Ambassador to introduce Falun Gong at the Chinese Embassy in France, and by 1998 the China State Sports Commission reported that over 70 million people in China practised Falun Gong.

This resurgence of Chinese spiritual tradition and morality was a positive development for Chinese society. But Chinese Communist Party (CCP) hard-liners, like then-leader Jiang Zemin, saw it as an afront to the atheist ideology of communism. Jiang sought to eradicate Falun Gong and enforce the Party’s control of religion as seen during the Cultural Revolution. By 1997, Falun Gong books were being banned in China, and over the next few years meditation groups in parks were disrupted and Falun Gong was increasingly demonised in the media.

In mid-April 1999, a magazine in Tainjin city, southeast of Beijing, published an article that slandered Falun Gong. Local practitioners sought to explain the inaccuracies and requested a correction, which was refused. On April 23-24, the Tianjin Public Security Bureau used anti-riot police to beat and arrest over 40 people. Tianjin police told practitioners that to resolve the problem they needed to go to Beijing.

Falun Gong practitioners in Tianjin and Beijing heard this message and on April 25, 1999, over 10,000 informally gathered outside the State Council appeals office at the Zhongnanhai compound in Beijing, which also houses offices of the General Secretary of the CCP and Premier of the People’s Republic of China. Practitioners stood or sat quietly on footpaths, being careful not to obstruct activities on the streets or footpaths.

The Chinese Premier at that time, Zhu Rongji came out with several staff to meet the practitioners. Zhu called four practitioners to come inside and meet the Deputy Secretary of the Appeals Office. The practitioners explained the situation and asked for the release of detained practitioners, for open publication of Zhuan Falun (the main text of Falun Dafa), and for a fair and lawful environment to practise Falun Gong.

The issues appeared to have been resolved and the practitioners went home that night. It was the first time since Tiananmen Square in June 1989 that so many Chinese had gathered in public to appeal to the government. CCP officials later claimed it was an organised “siege” that posed a threat to CCP leaders. Some western governments and media still wrongly refer to the CCP’s narrative as a reason to ban Falun Gong.

The War on Falun Gong

However, a few months later on July 20, 1999, the CCP banned Falun Gong and began its war-like campaign to eliminate the group and its teachings entirely.

Writing in Geopolitical Futures in February 2022, George Friedman wrote about four phases of war. How did these phases manifest in the CCP’s battle to eliminate Falun Dafa?

In the first phase of intelligence, understanding the intentions and capabilities of an adversary, the CCP had made a grave miscalculation. It had assumed that peaceful meditators would be easily intimidated into renouncing their beliefs. It was also blinded by its hatred of religion, assuming that Falun Gong practitioners were against the CCP, while in fact they had peacefully co-existed for seven years under CCP rule and only sought the freedom to practise their meditation and beliefs.

In the second phase, the initiation and prosecution of war, the CCP mobilised all state machinery including the military, police, Public Security Bureau, diplomacy, justice, and propaganda media to break the will of Falun Gong practitioners and their ability to resist.

In the third phase of occupation, the CCP did not occupy the territory of Chinese Falun Gong practitioners per se, because the practitioners are Han Chinese. Instead, they occupied the homes, businesses, and institutions where practitioners lived or worked and removed practitioners to prisons, labor camps, black jails, and brain washing centres to achieve the CCP’s political ends of eliminating Falun Gong.

In the fourth phase of pacification, the CCP has used all its coercive and brutal state resources to limit Falun Gong practitioners’ resistance and break their will through “re-education” and torture to enforce signed guarantee statements to renounce Falun Gong.

Impact on the World

The CCP’s campaign to eliminate Falun Dafa is failing, but in the process, it has damaged the people of the entire world. While Falun Gong teaches goodness and compassion, Chinese Embassies and Consulates in Australia and other countries spread propaganda to demonise the practice.

The CCP uses trade and financial inducements to erode the moral and ethical foundations of western democracies by requiring silence on the persecution of millions who peacefully uphold the principles common to all orthodox religions.

As we in Australia remember the ANZAC spirit on April 25, we can also remember the spirit of tens of thousands of Falun Gong practitioners who have been killed through torture and barbaric organ harvesting during the CCP’s persecution, which continues today.