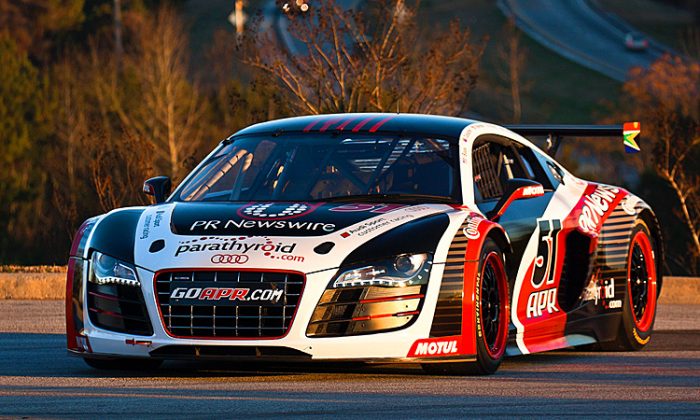 APR, which recently announced that it would be the first North American team to run an Audi R8 LMS Ultra Grand Am in the 2012 Rolex Sports car series, has added some serious punch to its presence at the 50th-Anniversary Rolex 24 at Daytona.

“I would like to thank APR for giving me this opportunity to drive in one of the classic 24-hour races,” said Pirro on the APR website. “I have a lot to learn, and I hope to be able, together with the rest of the APR Motorsport team, to finish the race in a good position to make the best possible introduction of the Audi R8 Grand-Am in the American market.

“I know the race will be super competitive. I am ready for it; I am well trained; I am in very good shape and very motivated. I will have a very open-minded approach, as I have very limited experience in the GT class, although I have overtaken tons of them in 10 years of prototype racing!”

Pirro started his racing career in GT cars but switched to formula cars and then prototypes, driving the Audi R18 and R10 TDI to five Le Mans victories and two American Le Mans Series championships. The 49-year-old German left Audi in 2009, coming back to drive a few races for Drayson Racing in the ALMS in 2010.

In his long racing career, Pirro has only raced at Daytona once, when the Daytona 24 Hours was a World Sportscar Championship round.

“The Rolex 24 at Daytona has a very special meaning for me,” said Pirro. “It was my very first car race outside of Italy, driving the Lancia Montecarlo Turbo in the World Endurance Championship opening round.

“My racing experience was very limited, and the longest race I had done was 25 minutes. I remember the first time I saw the track. I was almost shocked! After this fantastic experience, when I came back to Italy I was celebrated as a hero. I never went back and now, after 31 years, I am really excited about it.”

Nelson Canache Signs on for Rolex 24

Pirro will join drivers Dion von Moltke, Ian Baas, and Dr. Jim Norman in the No. 51 APR Audi for the Rolex. The team will be completed by two-time Venezuelan Super Touring GT champion Nelson Canache, who earned his place on the team by setting a track record in his second test session.

APR CEO Stephen Hooks said of the new driver additions, “To have the chance to bring Emanuele on board for the Rolex 24 at Daytona is a dream come true. He’s one of the most successful endurance racers of our time and a hero to Audi fans all over the world. We aren’t underestimating the challenge of finishing the Rolex 24 at Daytona, but having Emanuele join APR gives everyone a big boost of confidence.

“Nelson tested with us recently, and he showed outstanding pace and gave great feedback in an unfamiliar car, setting a track record in his second on-track session. He will be a great addition to the team of Dion, Dr. Jim, Ian and of course, Emanuele.”