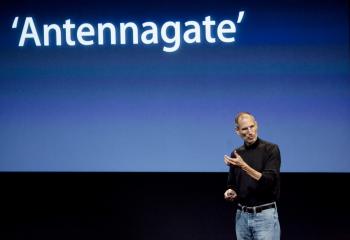 Caroline Dobson
View profile
Follow
biggersmaller
Print
Apple Inc. is facing some quality control issues. An executive who oversees iPhone hardware has left the company, and the electronics maker itself is facing a barrage of complaints regarding the antenna associated the latest version of its smartphone.

The Cupertino, Calif.-based technology giant offered complimentary “fixes” for consumers who had problems with dropped calls. Apple recently announced that it would provide free protective cases to users who had purchased the latest iPhone handset in order to offset the so-called “death grip” problem—whereby holding the phone itself with a bare hand was enough to interfere with the reception of the wireless signal.

Mark Papermaster, Apple's senior vice president of iPhone and iPod hardware engineering, is leaving the company, according to Apple spokesman Steve Dowling. The circumstances surrounding the reason for Papermaster’s departure was not confirmed to be dismissal or voluntary. This is only a few weeks since the antenna troubles surfaced for Apple.

Other Apple-branded products are also failing consumers. The Japanese government has urged the popular technology company to post prominent notifications on its website warning the possibility of iPod Nano music players overheating.

Japan’s Ministry of Economy, Trade, and Industry confirmed there were 61 cases of batteries overheating for first-generation iPod Nano devices sold in 2005 and 2006. Apple claimed that the problem was “rare.”

However, an official said that "four people burned themselves after they touched the device, which had overheated during charging.” There have also been six fires that required firefighter intervention.

The Japanese are considered to be one of world’s biggest fans of Apple products, given the long queues for the latest Apple iPhone models and the iPad tablet computer. According to the ministry, 1.8 million first-generation iPod Nano players have been sold in Japan, with around 27 incidents reported at this point.

An alarming incident did occur when Murray Gill, an Australian Macworld reader, he e-mailed an image of his own first-gen iPod Nano, which was evidently damaged from overheating. “The term overheating is an understatement,” says Gill. “It was more like an explosion.”

“Whilst lying in bed the unit suddenly started hissing loudly and emitting huge plumes of white smoke. It got extremely hot, the case split partially apart and the smoke filled the room. I was able to fling it onto the floor where it melted the carpet. I shudder to think what may have happened if I had been asleep.”