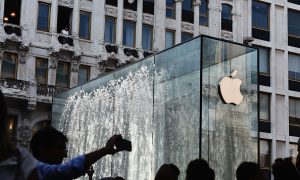 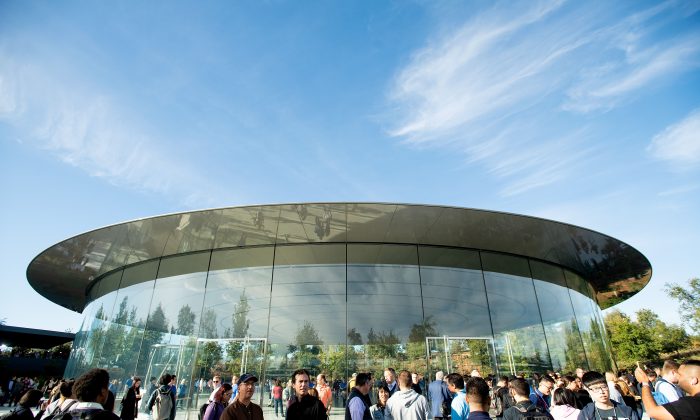 Attendees gather for a product launch event at Apple's Steve Jobs Theater on September 12, 2018, in Cupertino, California. - New iPhones set to be unveiled Wednesday offer Apple a chance for fresh momentum in a sputtering smartphone market as the California tech giant moves into new products and services to diversify.Apple was expected to introduce three new iPhone models at its media event at its Cupertino campus, notably seeking to strengthen its position in the premium smartphone market a year after launching its $1,000 iPhone X. (Photo by NOAH BERGER / AFP) (Photo credit should read NOAH BERGER/AFP/Getty Images)
Tech News

Apple’s Reinvention as a Services Company Starts for Real

When Apple Inc. boss Tim Cook takes the stage at the Steve Jobs Theater in Silicon Valley on, March 25, he will usher in a new era for the world’s largest technology company.

The chief executive officer is expected to unveil streaming video and news subscriptions, key parts of Apple’s push to transform itself into a leading digital services provider. The company may even discuss a monthly video games subscription. Likely absent from the event: Any new versions of the gadgets that have helped Apple generate hundreds of billions of dollars in profit since 1976.

It’s a particular challenge for Cook, who took over after Jobs died in 2011. The current CEO is an expert in hardware supply chains who spent years wrangling eager component manufacturers in Asia to assemble the company’s blockbuster iPhone. Apple’s newer partners—Hollywood studios, movie stars, newspapers and magazine publishers—are more wary of working with tech giants, or have already teamed up with rivals like Netflix Inc. and Amazon.com Inc.

“This is a pivotal shift for Apple and in our opinion, the biggest strategic move since the iPhone was unveiled in 2007,” said Dan Ives, an analyst at Wedbush Securities. “There is massive pressure on Cook and Apple to deliver on services, with streaming content a potential linchpin of growth.”

On March 24, Apple will be adding video and news subscriptions and could unveil a similar offering for credit cards. The company may also discuss combining all these digital services into a single bundle, similar to Amazon’s popular Prime program. Apple already has discussed the possibility of discounts for users who subscribe to more than one service.

The venue itself indicates the importance of the event to Apple. The company has only used the Steve Jobs Theater at its new headquarters twice since it opened two years ago. The first time, Apple debuted the iPhone X. The second time, it launched the iPhone XS and latest Apple Watch. To ensure all attention will be on services, Apple took the rare step of announcing several new hardware products on its website recently, including upgraded AirPods, iPads, and iMacs.

Unlike the iPhone in 2007, which broke new ground, Apple’s video service faces stiff competition from well-established players. Netflix, Amazon, Walt Disney Co., Hulu, and AT&T Inc. are investing at least $20 billion combined each year on content, while Apple is spending about $1 billion this year, according to Ives. He thinks Apple needs to acquire a major video content company, although the iPhone maker has shunned big deals in the past.

Still, there’s a base of at least 1.4 billion active Apple devices, giving the company an advantage over rivals such as Netflix. The Apple video service will be tied to a TV app that is already pre-installed on Apple devices, putting the company’s content at the fingertips of hundreds of millions of potential viewers.

Apple Music and Apple’s App Store have already benefited from being standard features of iPhones and other gadgets made by the company. Services revenue reached almost $11 billion in the holiday quarter, up 19 percent from a year earlier.

“If Apple executes with minimal speed bumps and aggressively acquires content, given the company’s massive installed base and unmatched brand loyalty we believe reaching 100 million subscriptions in the medium term (3 to 5 years) is a realistic goal that could translate into a $7 billion to $10 billion annual revenue stream over time,” Ives wrote in a recent note to investors.

Apple is also working on a premium games subscription for its App Store and discussing it with potential partners, according to people with knowledge of the plans. This service won’t take on new cloud-based streaming offerings like Google Stadia. Instead, it will focus on iPhones and iPads and bundle together paid games from different developers that consumers can access for a monthly fee. Cheddar previously reported that Apple was working on a gaming-related subscription service.

The company would collect these monthly fees, then divide up the revenue between developers based on how much time users spend playing their games, one of the people said. Apple is likely considering popular paid titles on the App Store and would exclude titles that are free to download but generate revenue via in-app purchases.

Apple could discuss the service as soon as March 25, or it may choose to detail the offering at its conference for developers later this year. Some of the most popular paid games on the App Store include Microsoft-owned Minecraft and franchises like NBA 2K and Grand Theft Auto.

Apple shares have risen more than 10 percent in March to a four-month high ahead of the March 25 event. Here’s what to watch out for:

The service will focus on original content, including TV shows and movies from producers such as Damien Chazelle, M. Night Shyamalan, and Oprah. There are documentaries, such as “Elephant Queen,” and animations, like “Wolfwalkers” by Oscar-nominated studio Cartoon Saloon, along with a re-imagining of the “Amazing Stories” from Steven Spielberg, and a drama starring Jennifer Aniston and Reese Witherspoon. An important, unanswered question: Will the company keep its streaming creations exclusive to Apple devices, or release them on Android phones and other distribution channels? Apple’s original content will begin rolling out toward the end of the year. A major component will be a feature for tapping into bundles of content from providers like HBO, Starz, and Showtime—similar to Amazon’s Channels offering. Netflix and Hulu won’t be involved. Apple has big ambitions for the service and is hiring people with experience in promoting movies and TV shows for awards including the Emmys and Oscars.

This service will combine stories from newspapers, websites, and magazines into a new tab in the Apple News app on iPhones, iPads, and Macs. Apple plans to charge about $10 a month. The service will come as part of an upcoming iOS 12.2 software update, which will also include a redesigned icon and interface for the Apple News app. The New York Times and The Washington Post are not part of the service, but The Wall Street Journal and Vox will participate. Apple based the service on Texture, an app it acquired last year. Texture lets users subscribe to more than 200 magazines, and most of those will transfer to Apple’s new service. (Bloomberg Businessweek and Bloomberg Markets are currently part of Texture).

Apple and Goldman Sachs Group Inc. are working on a joint credit card tied to the iPhone and Apple Pay app. Goldman CEO David Solomon is planning to attend the March 25 event, suggesting the partnership will either be announced or a deal is near. Apple’s iOS 12.2 update will include a new Wallet app that lays the groundwork for the Goldman credit card. The card will support new virtual rewards and tracking system to encourage timely payments.