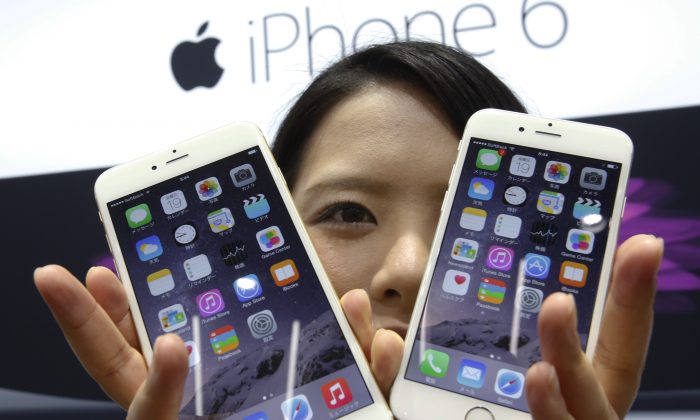 In this Sept. 19, 2014 file photo, a customer shows off the new Apple iPhone 6 and 6 Plus. (AP Photo/Shizuo Kambayashi, File)
China

In a move to gain better access to the tech market in China, Apple has agreed to offer its line of products for Internet security evaluation by the Chinese regime, reported the state-run Beijing News on Jan. 21.

Negotiations between Apple CEO Tim Cook and Lu Wei, the director of the China’s Internet Information Office, which is in charge of censoring the Internet, took place in December last year in the United States. Apple wanted to increase the sale of iPhones, iPads, and Macs in China, while China said it wanted a guarantee from Apple that users’ information and privacy can be protected, and national security would not be compromised.

According to the Beijing News, the following dialogue took place.

“The speculation that we would provide third parties backdoors to access to users’ information is completely false,” Cook said. “We never did and we will never do such a thing.”

“What you said doesn’t count,” Wu responded. “Your new products must undergo security inspections by us. We must draw our own conclusions, so that users can feel secure using these products.”

Then Cook gave his consent that Apple would cooperate fully to China’s Internet security evaluation.

“Apple might hand over its source code to the Chinese government,” said Charlie Smith (a pseudonym), one of the activists of GreatFire.org in an email. Great Fire is a non-profit organization that monitors online censorship in China.

Apple might hand over its source code to the Chinese government.
— Charlie Smith, Internet activist

If Beijing obtains Apple’s source code, “It might make it easier for China to find vulnerabilities in its product, which might be used to compromise Apple devices,” Smith added.

The source code would also allow a Chinese manufacturer to produce devices with pirated Apple code.

Smith continued: “But there is no way that they will open-source it to the general public.”

It is without a doubt that Apple will grant China the right to long-term oversight of its products, because of Apple’s market share in China, according to Smith.

Apple did not immediately respond to questions sent by email, inquiring about what types of inspections the Chinese regime will be allowed to conduct on its products.