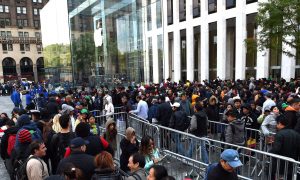 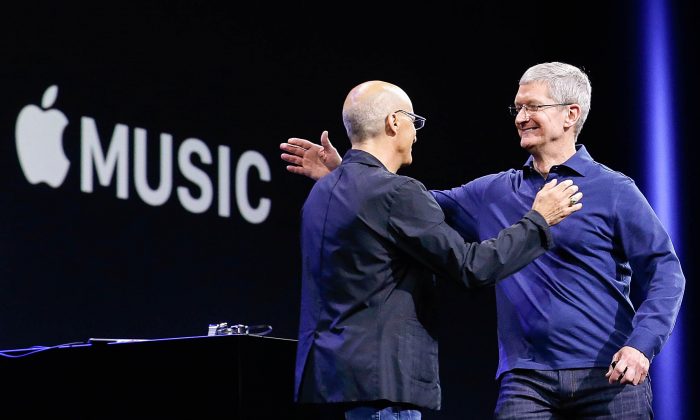 SAN FRANCISCO—Apple announced a major new foray into streaming music on Monday as it showed off a host of new software features for its iPhones, iPads and Mac computers.

The $10-a-month music service is called Apple Music and combines on-demand listening, a 24/7 radio station hosted by live DJs and a forum for artists to give fans behind-the-scenes content from upcoming releases.

The service, which was announced during Apple’s annual software conference Monday, will be launched later this month in more than 100 countries. It comes at a time when iTunes songs and album sales are falling, while streaming music leaders like Spotify and Deezer are gaining subscribers and revenue.

The music service was the biggest news of the company’s five-day conference, but Apple also announced a host of new upgrades and services coming later this year to the operating software for its popular iPhones, iPads and Mac computers.

The new features including enhancements to Siri, the company’s voice-activated digital assistant, as well as ApplePay, Apple Maps and the Apple Watch. Executives also mentioned a new streaming TV service that Apple is reportedly hoping to announce later this year.

Analysts say the new services and upgrades, which will be available when Apple releases free updates to its iOS and Mac OS software this fall, are part of a broader strategy to make Apple’s devices indispensable.

Some of the new features could provide new profits for the tech powerhouse. But perhaps more importantly, they may help keep customers from defecting to rivals like Google, which showed off new features for its competing Android mobile software at its event last month.

Here’s a look at the new features Apple announced:

The service represents a chance for Apple to come from behind in a digital music field that it once led. With a lengthy three-month free trial, a $15-a-month plan for up to six family members, and the ability to push the app to 100s of millions of iPhone and iPad users, the launch could mark a major milestone in digital music.

Besides offering the new subscription plan, the app also will continue to allow download purchases from iTunes. It will be available this summer for Apple devices and Windows PCs, and in a break from Apple’s usual practice, it will also be released as an app for Android devices this fall.

The live radio station, called “Beats 1,” puts a twist on Internet radio, a field led by Pandora, by having human DJs host a constant stream of talk and music from Los Angeles, New York and London, led by former BBC host Zane Lowe.

The company is also touting a feature called “Connect,” which artists can use to share notes, recordings and photos with their fans who subscribe to Apple Music.

Apple’s voice-activated digital assistant will be integrated into the new music service, so subscribers can ask it to play songs from movie soundtracks, find hit songs from a certain year, or create playlists from top songs in different genres.

Siri is also gaining more intelligence, according to Apple executives, who demonstrated by having Siri do things like search an iPhone-users’ photos with a voice command, such as “Show me pictures from San Francisco last July.”

With the coming software update, Siri also will be able to anticipate certain requests and remember websites, saidApple senior vice president Craig Federighi. So, a user can tell Siri to “remember this” and it will later show a link to a website viewed earlier.

Siri will also gain the ability to search within apps loaded on the iPhone, to provide links to information from a restaurant or food app, for example.

Along with making payments tied to a credit or debit card, Apple Pay will soon incorporate store-issued payment cards and rewards from loyalty programs offered by merchants like Walgreens and Dunkin Donuts. That could be a key to making the service more useful for shoppers, according to analysts at Forrester Research.

Apple says Apple Pay has been quickly embraced by shoppers and merchants since it was launched last fall, but it hasn’t released many financial details. Forrester analysts said in an email that the idea of paying with a smartphone in stores is still new and it’s unclear if consumers view it as a novelty or an essential shopping tool.

Apple announced an update to the watch operating system and said it will release the programming tools that independent developers need to build apps that can interact directly with the watch’s hardware and sensors.

The watch still requires a link to the iPhone to perform many functions, but Apple’s Kevin Lynch said the new software upgrade will let the watch connect directly to Wi-fi networks, so it will be able to provide some services even if the owner’s iPhone isn’t nearby.

While tech experts see big opportunities in wearable devices, some consumers are “still on the fence,” said app-builder Jordan Edelson of Appetizer Mobile. He said the new app-building tools will help developers show how useful the watch can be.

Apple did not release any sales figures for the watch, which it began selling in April.