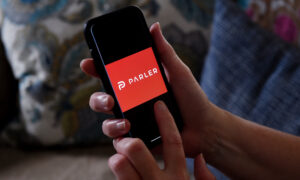 This illustration picture shows social media application logo from Parler displayed on a smartphone in Arlington, Virginia on July 2, 2020. - Amid rising turmoil in social media, recently formed social network Parler is gaining with prominent political conservatives who claim their voices are being silenced by Silicon Valley giants. Parler, founded in Nevada in 2018, bills itself as an alternative to "ideological suppression" at other social networks. (Olivier DOULIERY/AFP via Getty Images)
Social Media

Apple has suspended social media platform Parler from its App Store for not take “adequate measures” to address alleged “threats of violence and illegal activity” by its users.

“We have always supported diverse points of view being represented on the App Store, but there is no place on our platform for threats of violence and illegal activity,” the tech company wrote in a statement to media outlets. “Parler has not taken adequate measures to address the proliferation of these threats to people’s safety. We have suspended Parler from the App Store until they resolve these issues.”

Apple’s ban comes after Google removed the social media platform, which has attracted a large following of conservative-leaning users, from its Play Store, saying that the application will remain suspended until its developers commit to a moderation policy that could handle “egregious content.”

Apple did not immediately respond to The Epoch Times’ questions about the move to ban the social media platform.

John Matze, Parler’s founder, released a statement following the ban, saying that it disagrees with Apple’s claims. He added that Apple did not engage in the same behavior when a hashtag suggested violence against Vice President Mike Pence, “Hang Mike Pence,” was trending on Twitter.

“Apple will be banning Parler until we give up free speech, institute broad and invasive policies like Twitter and Facebook and we become a surveillance platform by pursuing guilt of those who use Parler before innocence,” Matze said in his statement on Parler.

“They claim it is due to violence on the platform. The community disagrees as we hit number 1 on their store today. The same day ‘Hang Mike Pence’, a disgusting violent suggestion, was trending nationally on Twitter. Displaying the horrible double standard Apple and their big tech pack apply to the community.

“Apple, a software monopoly, provides no alternatives to installing apps on your phone other then their store. We do not own our phones, Apple simply rents them to us. Apple, Google and the rest of the anti-competitive pack of big tech tyrants coordinate their moves and work together to stifle competition in the marketplace,” he added.

The move by Apple and Google to target Parler comes as Twitter and other Silicon Valley companies ramp up their policing of statements and comments from President Donald Trump and other conservatives. Twitter, on Friday, permanently removed Trump’s account on its platform and justified its censorship by saying that the president had violated its “Glorification of Violence Policy.”

The targeted moderation by these companies appears to be triggered by the civil unrest and acts of violence that occurred on Wednesday at the U.S. Capitol. A group of rioters and a minority of protesters waving American and Trump flags illegally stormed the Capitol building as lawmakers were counting electoral votes in a joint session of Congress. The mayhem left five people dead and dozens of police officers injured.

The media, lawmakers, former officials, and other critics have put the blame on Trump for Wednesday’s incident and have been calling for his impeachment. Earlier that day, the president addressed a crowd in Washington D.C. where he reiterated his allegations about election irregularities and fraud, and his dissatisfaction with the media and several lawmakers. At 12:16 p.m., he encouraged protesters to “peacefully and patriotically make your voices heard” at the planned protest outside the Capitol.

As thousands of protesters moved their demonstration to the U.S. Capitol, small pockets of violence were reported during clashes with police and media, while the vast majority of protesters remained peaceful. At 2:15 p.m., a small subgroup began rioting, smashing windows in an attempt to enter the Capitol building as other protesters tried to stop them. Shortly after, at 2:38 p.m., Trump started posting on Twitter, urging his supporters to “Stay peaceful.” He continued his urge for peace and respect for law enforcement throughout the afternoon.

“Silencing people, not to mention the President of the U.S., is what happens in China not our country,” Haley wrote.

“You want to ban @realDonaldTrump, fine you’re a private company, but @Twitter deleting the President’s account which highlights this admin & its history is wrong. @Facebook &  @instagram banning all images from the Capitol riot is a dangerous precedent to set. We aren’t in China,” Carson wrote.

Unbalanced policing of user content and certain political views has raised concerns over free speech rights and the lack of checks and balances on big tech companies. Discussions over limiting or eliminating liability protections under Section 230 of the 1996 Communications Decency Act for tech companies that have engaged in censoring or political conduct have been heavily discussed in the past year.