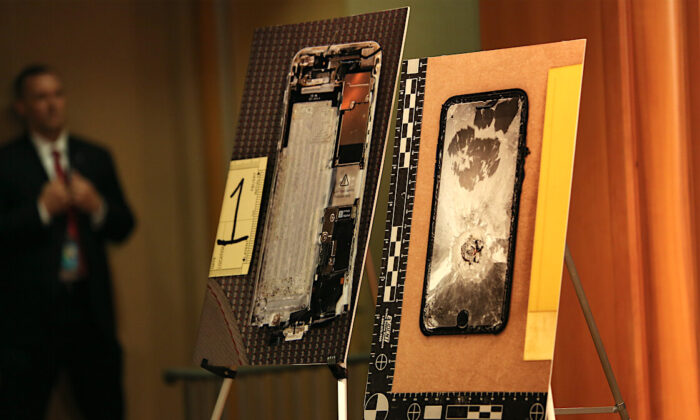 Images of two Apple iPhones that the Pensacola naval base shooter, Royal Saudi Air Force 2nd Lt. Mohammed Alshamrani, tried to destroy are on display at a press conference at the Justice Department in Washington on Jan, 13, 2020. (Charlotte Cuthbertson/The Epoch Times)
US News

Apple has pushed back against the Justice Department’s (DOJ) claim that it did not provide “substantive assistance” to investigators to help them unlock two iPhones used by a shooter who opened fire at members of the U.S. armed services at the Naval Air Station in Pensacola, Florida, last month.

“We reject the characterization that Apple has not provided substantive assistance in the Pensacola investigation,” the tech giant said in a lengthy statement to media outlets. “Our responses to their many requests since the attack have been timely, thorough, and are ongoing.”

On Monday, Attorney General William Barr urged the tech company to help the department unlock the two iPhones used by Royal Saudi Air Force 2nd Lt. Mohammed Alshamrani, 21, a flight student at Pensacola who killed three U.S. sailors and wounded eight other Americans when he opened fire at the naval base on Dec. 6.

“We have asked Apple for their help in unlocking the shooter’s iPhones. So far Apple has not given us any substantive assistance,” Barr said during a press conference announcing the findings of the Pensacola investigation. “This situation perfectly illustrates why it is critical that investigators be able to get access to digital evidence once they have obtained a court order based on probable cause.”

“We call on Apple and other technology companies to help us find a solution so that we can better protect the lives of Americans and prevent future attacks,” he added.

Barr said FBI experts were able to fix the two damaged iPhones so that they are operational, however, they have not been able to unlock the password-protected and encrypted phones. One of the phones was shot with a bullet during the attack.

“Both phones are engineered to make it virtually impossible to unlock them without the password,” he said.

Apple said in the statement that they had been producing a wide variety of information associated with the investigation since the FBI’s first request on Dec. 6. The company said it had provided information on iCloud backups, account information, and transactional data for multiple accounts as part of the requests.

Apple said they were first learned about the existence of a second iPhone and that the FBI was unable to access either iPhone on Jan. 6. After receiving a subpoena for information for the second iPhone two days later, the company responded within hours, Apple said.

The company added they were continuing to help the FBI and that their engineering teams had recently spoken to the department on the phone to provide additional technical assistance.

In response to Apple’s statement, a DOJ spokesperson said in a statement to media outlets that “Apple designed these phones and implemented their encryption. It’s a simple, ‘front-door’ request: will Apple help us get into the shooter’s phones or not?”

President Donald Trump also weighed in on the issue, rebuking the tech company for refusing to “unlock phones used by killers.”

“We are helping Apple all of the time on TRADE and so many other issues, and yet they refuse to unlock phones used by killers, drug dealers and other violent criminal elements. They will have to step up to the plate and help our great Country, NOW! MAKE AMERICA GREAT AGAIN,” Trump wrote in a Twitter post.

Federal officials are calling the Dec. 6 shooting an “act of terrorism.” They say investigators found evidence that Alshamrani was motivated by jihadist ideology, including a social media message posted on Sept. 11 last year, stating, “The countdown has begun,” and other anti-American, anti-Israel, and jihadi messages on social media, as recent as two hours before his attack. Alshamrani also visited the 911 Memorial in New York City during the Thanksgiving weekend.

Investigators say they are still continuing their probe and are looking for evidence of co-conspirators in the attack.

Justice Department officials said Apple has provided timely and substantial assistance to other parts of the criminal investigation such as responding to warrants issued to iCloud accounts. However, they added that Apple has not indicated they are willing to assist the FBI in gaining access to the phones after the bureau asked the company for help.