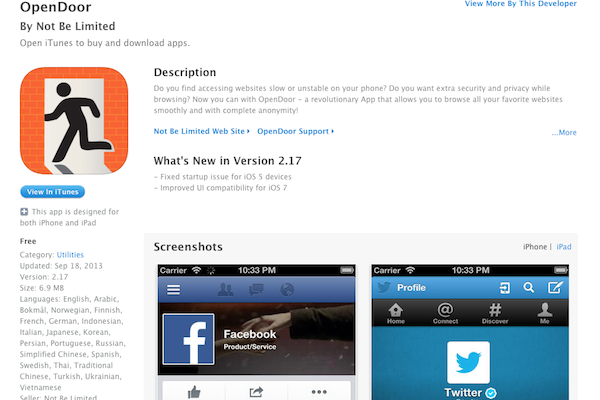 A screenshot of the OpenDoor App for iPhone and iPad on iTunes. (Epoch Times)
China

The strict regime of Internet censorship and surveillance enforced by the Chinese authorities drives many Internet users to seek out tools they can use to get around the restrictions — programs like OpenDoor, a browser that was available recently from the App Store in China.

Until Apple removed it.

The removal of OpenDoor follows a pattern of Apple bowing to pressure from Chinese authorities, removing content from the Chinese version of its App Store to conform to the regime’s demands for censorship.

The removal took place in July of this year, according to the Chinese edition of Radio Netherlands Worldwide.

OpenDoor had 2,000 downloads every day from China, said RNW. After it was removed from the App Store, the number went straight to zero. Apple did not inform the developers prior to the deletion, nor respond adequately afterwards, OpenDoor developers say.

On Aug. 28, over a month later, RNW’s promptings led Apple to write an email to the application developers notifying them that “OpenDoor has content violating China’s law,” without elaboration.

“We are not clear why a browser has illegal content. It’s the users’ choice of what websites they want to visit. Following Apple’s logic, Safari and Google Chrome should also have illegal content?” OpenDoor responded in a letter to Apple.

OpenDoor is not the only company that has been removed from the China App Store by Apple.

In July last year, Apple sent a note to New Tang Dynasty (NTD) Television, a primarily Chinese-language broadcaster based in New York City, telling them that NTD’s iPhone and iPad apps, called “iNTD,” would not appear in the China App Store. Apple’s email said that iNTD’s content was “illegal in China,” though it again did not specify which Chinese law it had broken.

OpenDoor has 800,000 users on Apple devices; one third of them were or are from China, according to OpenDoor developers. Users from Iran and Pakistan, states that also practice Internet censorship, give the app high praise on its Facebook page.

OpenDoor has an Android application under development.

Apple did not immediately respond to a request for comment via email.

Chinese users were stung by the removal of the software from the China App Store, according to a survey of Weibo posts. Piaocanlieyishenghei said “My OpenDoor doesn’t work now! My Twitter! My Facebook! AHHHHHH…” followed by tearful emoticons.

Netizen Aiyuanyue said: “Apple secretly took OpenDoor from the China App Store probably because it gave in under pressure from the Chinese government.”

Meishoujiushilaowang remarked: “Only the great Google doesn’t bow to the evil!” A probable reference to the fact that Google pulled out of mainland China in March 2010, announcing that it was no longer willing to censor searches in China.