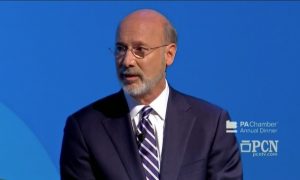 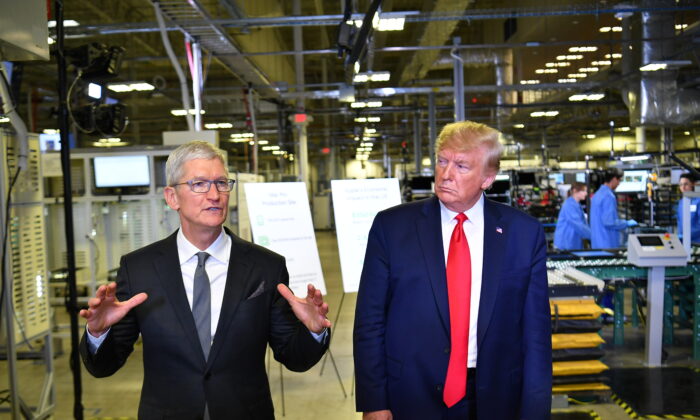 President Donald Trump and Apple CEO Tim Cook speak to the press during a tour of the Flextronics computer manufacturing facility where Apple's Mac Pros are assembled in Austin, Texas, on Nov. 20, 2019. (Mandel Ngan/AFP via Getty Images)
US News

The tech giant aims to produce at least 1 million face shields for medical workers per week, Cook said in a video on April 5.

Cook said the company had sourced the equipment through its global supply chain and that it was working “continuously and closely” with governments “at all levels” to distribute the face shields where they are need most urgently, in what he described as a “truly global effort.”

“We’re sourcing materials and manufacturing in the U.S. and China,” he said. “We plan to ship over 1 million by the end of this week, and over 1 million per week after that.”

The first shipment was delivered to Kaiser Hospital in Santa Clara Valley, California, last week, Cook said, adding that the feedback from doctors was “very positive.”

“We hope to quickly expand distribution beyond the U.S.,” he said, adding that the tech giant has been pushing to meet the “essential needs of caregivers urgently and at a scale the circumstances require.”

“For Apple, this is a labor of love and gratitude, and we will share more of our efforts over time.”

President Donald Trump on April 6 praised the company for ramping up its production facilities to produce critical supplies amid the outbreak of the CCP (Chinese Communist Party) virus, commonly known as the novel coronavirus.

“I want to thank Apple, one of the many great American companies that have leapt into action,” Trump told reporters at the White House. “Today Apple announced that it is now producing plastic face shields for health care workers at the rate of 1 million per week.

“These are shields that you see on television quite a bit. They are the highest level of quality and safety.”

It comes as the U.S. death toll from the CCP virus surpassed 10,000 on April 6, with more than 368,000 confirmed cases, according to a tracking map from Johns Hopkins University that collates official government data.

American health care workers are appealing for more protective gear and equipment as they face a surge of patients.

Doctors are also especially concerned about a shortage of ventilators, breathing machines needed for those suffering from COVID-19, the pneumonia-like respiratory disease caused by the CCP virus.

Beijing has been accused of hoarding billions of critical medical supplies, such as masks, as well as hundreds of tons of others globally amid the escalating pandemic, and shipping them back to China.