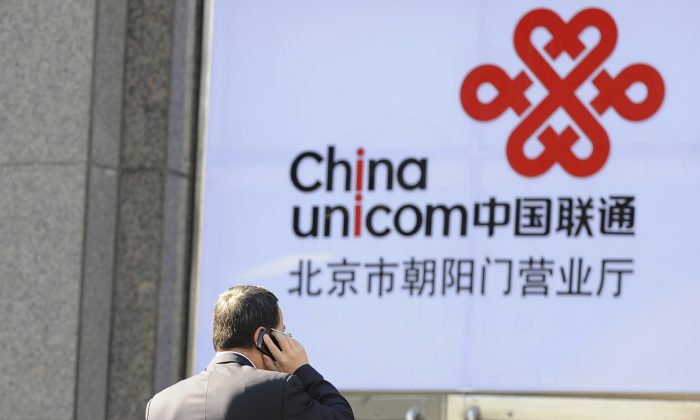 An office worker talks on a mobile phone in front of a China Unicom logo, California-based Apple's partner in China, in Beijing on Jan. 5, 2012. An anti-corruption investigation has yielded arrests of two executives, so far. (Liu Jin/AFP/Getty Images)
China

Chinese anti-corruption investigators are savaging China Unicom, the second-largest (and state run) telecommunications firm in China and a major partner of Apple. A deputy general manager has been arrested and expelled from the Communist Party; senior officials at the company have been forced to hand in their passports; the chairman of the board has dumped his stock; and employees have reportedly been eager to share dirt on management with Communist Party investigators.

Signs that anti-corruption authorities were moving against the company have been visible for several weeks now, with reports that two officials—Zong Xinhua, general manager of the IT and e-commerce unit, and Zhang Zhijiang, who was in charge of network construction—were under investigation.

“After the investigation group got established, it was like cutting open a wound—the years of internal conflict at Unicom came spilling out.”
— Caijing

China Unicom is one of the major participants in the China market roll out of the iPhone 6 and iPhone 6 Plus, Apple announced in late September.

The company in 2008 merged with China Netcom, another large state-run telco, which had long and deep ties with the eldest son of the former Communist Party leader Jiang Zemin. Jiang Mianheng’s escapades in the sector earned him the moniker “Telecommunications King” in years past. Jiang may still hold a potentially heavy stake in Unicom, given his former control of China Netcom through Shanghai Alliance Investment Ltd. Members of the Jiang Zemin political clique still occupy powerful posts at China Unicom, too.

Whether the current purge at China Unicom is politics by other means—a move by Xi Jinxing to further weaken the Jiang Zemin power base—is unclear. Investigations of state companies with extensive political ties have often been part of larger campaigns with political goals, but there is also the possibility, however remote in China, that the action is aimed simply at cleaning up a corrupt management team for the benefit of the Chinese consumer.

So far the hardest hit official is Zhang Zhijiang. He was once an award-winning fibre optics engineer, but later, as the former deputy general manager and former manager of the network construction division of China Unicom, he engaged in extortion, trading of favors, receipt of bribes, and other forms of corruption, official notices say.

These “severe violations of discipline” mean he is now in the tender clutches of Party investigators, who are known to use torture to extract the information they desire. Zhang has already been stripped of his Party membership.

Chang Xiaobing, the chairman of the board, is in a better position—though his recent actions on the Hong Kong stock market do not evince much confidence in the near term prospects of his firm. According to Caijing, a well-known Chinese financial publication, Chang had by Dec. 19 sold his entire remaining interest, of 680,000 shares, in China Unicom. He reaped about 5.6 million yuan, or $913,000 from that sale. An earlier drawdown in September, when the company was trading at a higher price, netted about $118,000.

Anti-corruption investigators “moved in and garrisoned” inside the company at around the end of November—after which time Chang’s large dumping of stock began.

The company in 2008 merged with China Netcom, which had long and deep ties with the eldest son of the former Communist Party leader Jiang Zemin.

Employees were reportedly delighted with the opportunity to discuss the shadier side of the company.

“After the investigation group got established, it was like cutting open a wound—the years of internal conflict at Unicom came spilling out,” said Caijing, quoting a company official.

Investigators received reports and accusations by “uncommonly lively” employees—both anonymous and with real names appended. Some employees also took to the internet to spread their discontent.

Part of the reason for this stemmed from the frustration resulting from the management friction associated with the merger with China Netcom in 2008 and 2009. Caijing reports that this, coupled with a broader move to reduce the autonomy of Unicom’s subsidiary businesses, created many internal conflicts.

Beginning from Nov. 27, when the inspection team physically moved into China Unicom offices, executives drastically cut their public activities, and there are hardly any visits from outside clients, according to Caijing.

Not to be outdone by anti-corruption officials, they also launched their own internal investigations, announcing the results to employees. For example, the Party Secretary of the Guangdong branch of China Unicom, He Xiang, had a penchant for flying first class—of course, billed to the company. They made an example of him by “subjecting him to political discipline” and demanding he pay back the difference between the first class flights and the standard reimbursement.

An official with the company, Yan Bo, the general manager of the company’s international section, was reported to have fled the country. He has not been contactable on his phone for several days, reports say. The company denies that he escaped—instead, he’s on medical leave. But just to make sure no one at the firm actually does, they have asked top executives to hand in their passports.