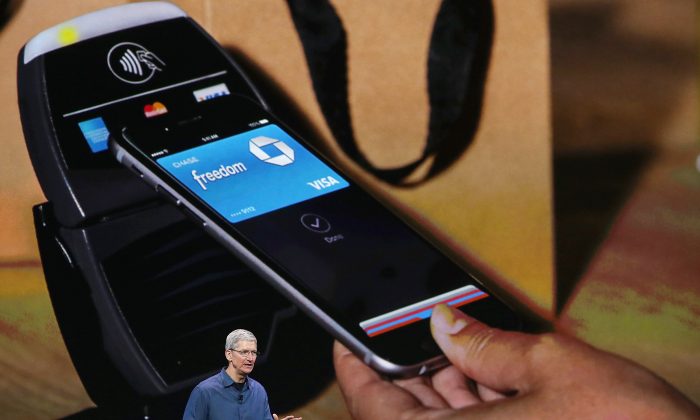 After the launch of the iPhone 6, Apple is continuing to copy existing technology with Apple Pay —and might just get it right.

The idea: Just wave your iPhone in front of a device installed at 220,000 shops around the country and walk away with your goods. No wallet, no cards, no cash needed.

That’s a great idea, but Apple didn’t come up with it, despite saying it’s due to the “innovative Near Field Communication antenna in iPhone 6.”

Android phones have been equipped with this “innovative” feature since 2011, but nobody ever uses the Google Wallet payment system, which is similar to Apple Pay. Why?

In a way, it’s all due to packaging and marketing. Like with the original iPod, which consisted of a normal hard-disk, an LED display and a simple control software, Apple is taking existing technology, puts in together in a neatly designed package and markets it properly.

With Apple Pay they are taking NFC, their touch-ID fingerprint technology, as well as the chip-and-PIN security system used in European credit cards and mix it up into one. Yes, it also helps that they have 500 million credit cards on file already in iTunes and new ones can be added to Passbook easily.

“Gone are the days of searching for your wallet. The wasted moments finding the right card. Now payments happen with a single touch.” Sounds good, doesn’t it?

In addition, Apple did a great job steering the media and Wall Street away from the new iPhone upon release and having them focus on payments as the next game changer. Now everybody wants to know how it works and possibly even try it.

For consumers, Apple Pay is a bit easier to use because they don’t need to unlock their screen, but just tap their finger to approve the transaction. So for them, the biggest selling point is convenience.

Most people don’t really mind using credit cards and cash, but then again, they also didn’t mind using their mini-disc player until the iPod came along.

For merchants and customers alike, security is another value proposition that Apple claims to do better than cards.

If you whip out your card in a store, the clerk and everybody else can see them. And even if you don’t whip them out, such innovative devices like RFID scanners can suck out all information from magnetic strips within a couple of feet. Ever wondered how these people in Kentucky could use your card to spend $300 at the local liquor store?

If you use Apple’s phone, the card numbers are converted into a different data package and stored on the phone, not on Apple servers. For every transaction, this package and a transaction specific code are needed for the bank to process your payment. So even if one transaction is pirated, it won’t be useful for others.

If you lose your phone, the card numbers aren’t on there and thieves need to have the phone online to use it, as well as having your finger print. If the phone is online, it can be wiped via the Find My iPhone function.

Merchants as well as credit card companies can sell these security and convenience features as a bonus to clients, and are therefore willing to give Apple a small part of their transaction fees.

The difference to Google’s Wallet? Apple succeeded in selling this value proposition to these parties whereas Google didn’t, even though it has many of the same features.