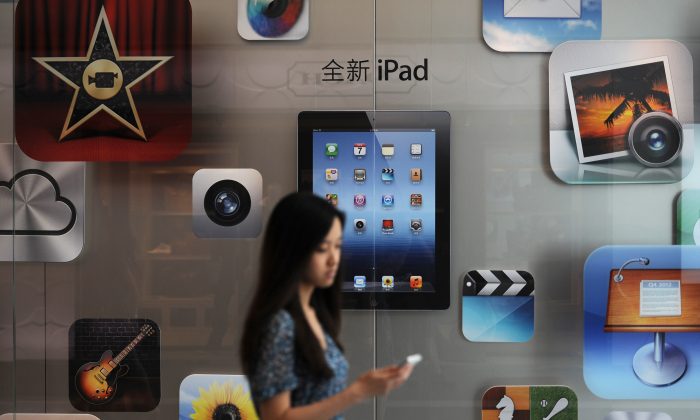 A woman walks by an Apple store in Shanghai on July 20, 2012. (PETER PARKS/AFP/GettyImages)
Business & Economy

Apple appears to have disabled its news app for iOS users who are connected to a mainland China carrier, according to foreign visitors to China.

The change was first noted in the English-language blogosphere on Thursday, Oct. 8, by Larry Salibra, an American expatriate in Hong Kong who noticed that the news app didn’t work during a business trip to China.

The news app isn’t available for download for users outside of the United States, but once on the device should work everywhere.

Access to the news app is determined by what network you’re connected to, according to Salibra, who figured out how the censorship mechanism worked by standing near the China-Hong Kong border and switching between Chinese and Hong Kong telephone networks.

Apple’s in-device modifications appears to be responsible for the app not working, and not some external interference. Salibra said that news content he had downloaded onto his device before he entered mainland China could not be read once his phone was connected to a Chinese network.

“They’re censoring news content that I downloaded and stored on my device purchased in the USA, before I even enter China just because my phone happens to connect to a Chinese signal floating over the border,” Salibra wrote in a post on Reddit. “On device censorship is much different than having your server blocked by the Great Firewall or not enabling a feature for customers with certain country iTunes account.”

In the same Reddit, another user corroborated Salibra’s problem with the app.

“Can confirm. I have a U.S. account but work in China. News app is blocked, as I assumed it would be,” user lateral_thinker wrote.

This isn’t the first time Apple has acquiesced to the Chinese regime’s censorship demands. In 2009, Apple banned apps related to the Dalai Lama from the Chinese version of its app store. According to Salibra, the live radio station Beat 1 on iOS’s music app is also banned.

During the 2008 Beijing Olympics, Chinese authorities blocked the U.S. version of the iTunes Store after the release of the album “Songs for Tibet—The Art of Peace.”

Users of iOS in China also have to use a different versions of the maps app, one that’s provided by the Chinese map company AutoNavi Holdings.

China is one of the largest markets in the world for Apple. The company drew $13.2 billion from China, Taiwan, and Hong Kong in its third quarter this year, a 112 percent increase from the same period in 2014.

Apple has declined requests from various news outlets for a comment on its censorship policy in China.