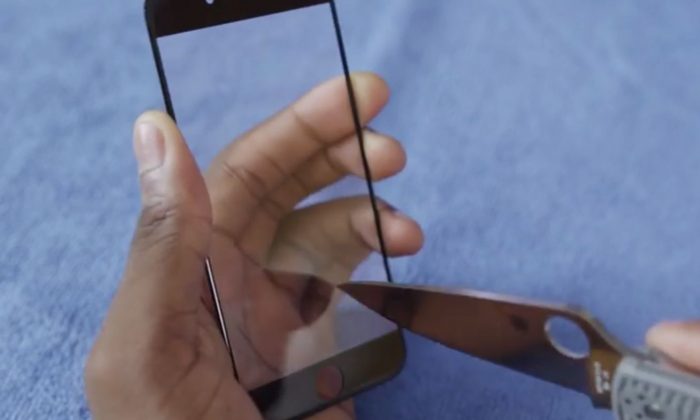 The Apple iPhone 6 4.7-inch variant was apparently leaked and a video shows it being tested.

The video shows the alleged iPhone 6 display–which appears to be made out of sapphire glass–getting a scratch and bend test.

YouTube user Marques Brownlee posted the video, and said he obtained the front end display for the device, which is reportedly coming out in September.

He took a knife and keys to the screen and notes that it’s highly scratch-resistant. He also attempted to stab it, but it didn’t bend or break.

Brownless also tried to bend it with his hands and feet, but it didn’t permanently bend or break in half.

The video upload comes as reports say that Foxconn might be relying on about 10,000 robots to help make the iPhone 6 models in 2014.

Chinese website IT Home says each machine can build as many as 30,000 units per year. Foxconn has been the primary supplier for Apple for its iPhones, iPads, and iPods.

“Foxconn has recently ramped up its production efforts ahead of the launch of Apple’s iPhone 6 this fall, with the company bringing on 100,000 new workers to help assemble the iPhone 6. Production of the new device is reportedly set to ramp up next month ahead of a launch around September. The iPhone 6 is expected to come in two sizes of 4.7-inches and 5.5-inches, and feature a thinner profile, an improved camera, a faster A8 processor, and more,” says MacRumors.com.

“To remain cost competitive, we have been continuously controlling manufacturing overhead to attain better operating leverage and improving efficiency and yield rate through automation using robot arms and industrial engineering methods like production cell management,” the firm said in 2013, according to Mashable.

The iPhone 6 is expected to be thinner and feature a larger screen. There’s also been rumors that the larger 5.5-inch variant will be called the iPhone Air