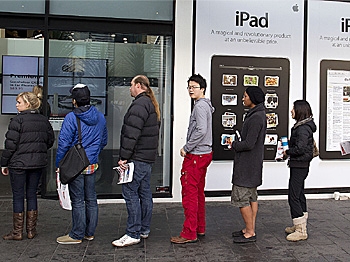 SUCCESS: Customers line up to buy the new iPad at an Apple store in Auckland, New Zealand on July 23. Apple's success in selling its iPad computer is prompting rivals to develop their own mobile tablet computers. (Brendon O'Hagan/AFP/Getty Images)
Business & Economy

NEW YORK—Apple Inc. sold 3 million copies of its iPad tablet computer in the first 80 days after it went on sale.

Running on the same operating system as the company’s iPhone and iPod Touch, the tablet computer runs apps, surfs the web, and can perform a host of multimedia features.

“Customers around the world are experiencing the magic of iPad and seem to be loving it as much as we do,” said Steve Jobs, Apple’s CEO, in a statement in May.

Apple’s success with the tablet computer is prompting its rivals—including Microsoft Corp. and Research In Motion Ltd.—to scramble to come up with their own versions of the tablet.

At its quarterly conference call with analysts, Microsoft CEO Steve Ballmer said, “Apple has done an interesting job of putting together a product—they’ve certainly sold more than I’d like them to sell.” Speaking of Microsoft’s own tablet—to be based on a mobile version of its Windows 7 operating system, “They'll be shipping as soon as they are ready,” Ballmer said. “It is job one urgency. No one is sleeping at the switch.”

But ironically, it was Microsoft that introduced to the world the original tablet PC in 2001.

But somehow Microsoft was about ten years too early to the party—the infrastructure wasn’t yet in place to support a full experience on a tablet computer. Wi-Fi was still in its early stages, and there was no mobile network—3G speed wireless data transfer was still 7 years away—to fully take advantage of a mobile tablet computer. Sales flopped, and Microsoft killed the program in two years’ time.

Now, Ballmer is talking about a new Windows tablet. And one can’t help but notice that Ballmer may have iPad envy, seeing how Apple literally took away Microsoft’s rightful stake in the market, some ten years later.

And a parting shot at the iPad? “I mean some people actually like to print every now and then,” Ballmer said. “Ours will print.”

One can’t help but notice Microsoft’s push to develop a tablet computer is reminiscent of an earlier push to rival Apple’s iPod series of MP3 portable music players in the early 2000s.

Today, Microsoft’s Zune line of MP3 players are capable alternatives to Apple’s iPod line, but it’s already too late by at least three years—Apple’s combination of iPod and iTunes market dominance is seen as already too late to make a dent in, by Microsoft or Sony or any other electronics maker.

But one area that Microsoft could hold an advantage—and which could help its tablet sales—is its early dominance in cloud computing. Microsoft, traditionally a software firm, has allocated billions of dollars to development of cloud computing, essentially storing data and software on the Web instead of on the end user’s computer.

“While the buzz has picked up around Azure (Microsoft’s cloud platform solution) over the past 12 months, we do not believe the company gets enough credit,” Oppenheimer analyst Brad Reback wrote to clients in a recent research note.

The device will be called the Blackpad and would cost as much as the iPad and offer similar features in a similar-sized package, according to the sources. The device is expected to run on a new version of the company’s BlackBerry mobile software.

Korean smartphone maker LG said in July via a brief press release in Korean that the company is expected to launch a tablet based on the Google Android platform sometime in the fourth quarter. The company provided no other details.

Another major player—Hewlett-Packard—has confirmed that it would release two tablets this fall, one running on Windows, and another running WebOS from Palm Inc., the struggling smartphone maker it bought earlier this year for $1.2 billion.

No matter how many manufacturers are developing iPad-alternatives, one major concern is how to bridge the gap in the number of available applications between Apple and its rivals BlackBerry, Windows, Android, and Palm. So far, no platform comes even close to the 200,000 apps currently in the Apple library.

Since Jan. 1, Research In Motion has seen its shares drop 14.8 percent, Microsoft’s stock has dropped 15.3 percent, Google’s has dropped 22 percent, and HP has declined 10.6 percent.

Apple’s stock, by comparison, has increased 22 percent during the same period.