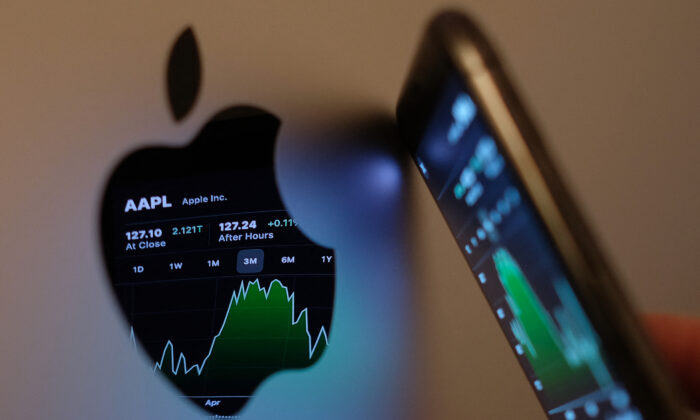 The Apple stock market ticker symbol AAPL is displayed on an iPhone screen and reflected in the logo of an iMac computer in Los Angeles, in this illustration photo taken on May 24, 2021. (Chris Delmas/AFP via Getty Images)
Media & Big Tech

Apple is to introduce its “Tap to Pay” feature that enables merchants across the United States to use iPhones to accept Apple Pay, debit cards, credit cards, and other digital wallets by tapping their phones.

No additional payment terminal or other hardware is necessary, according to the company. The service will be compatible with contactless debit and credit cards that use payment networks like Visa, Mastercard, Discover, and American Express. At checkout, customers will have to hold their Apple iPhone or Watch device to pay the merchant via Near Field Communication (NFC) technology.

NFC is a communication standard that is based on radio, and is used to exchange data with a touch gesture. It is also used for wireless charging of devices.

“As more and more consumers are tapping to pay with digital wallets and credit cards, Tap to Pay on iPhone will provide businesses with a secure, private, and easy way to accept contactless payments and unlock new checkout experiences using the power, security, and convenience of iPhone,” Jennifer Bailey, Apple’s vice president of Apple Pay and Apple Wallet, said in a Feb. 8 press release.

Payment processor Stripe has set up a web page for those interested in integrating the Tap to Pay iPhone feature into their Stripe Terminal. The company already offers Apple Pay through the platform. “Stripe will be the first payment platform to offer Tap to Pay on iPhone to their business customers, including the Shopify Point of Sale app this spring,” the company said.

Other payment apps will soon follow, with Apple Store locations in the United States to start offering Tap to Pay later this year.

Tap to Pay is the latest in Apple’s growing list of payment solutions.

Apple Pay is currently accepted by over 90 percent of retailers in the United States. The company’s Apple Card is operated in conjunction with Goldman Sachs, while its Apple Pay Cash is a peer-to-peer payment solution.

Apple promises strong data protection features for Tap to Pay as it uses the same technology being implemented in Apple Pay. All transactions made via Tap to Pay on the iPhone will be encrypted. And like Apple Pay, the company says it won’t have access to information like who is making the purchase or what is being purchased.

Despite Apple’s promises, its payment services have been shown to be vulnerable to hacking. In September last year, research conducted by the University of Surrey and the University of Birmingham in the UK showed that hackers can make use of vulnerabilities in Apple Pay code to bypass the iPhone’s lock screen and carry out contactless payments.