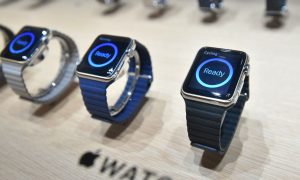 Apple’s stock price may be waxing and waning due to its close ties to the Chinese economy and its stock market, but the company has enjoyed an explosive growth from 1994-2014. The Epoch Times went through Apple’s annual public SEC filings and put together four different charts to chart the growth for the iconic Cupertino company.

Apple’s revenues and income have beaten themselves many times over, particularly after the release of the iPod, iPhone and iPad, in that order. Today, its mobile devices account for a majority of the revenue from the hardware and device giant.

With all the increases in revenue and income, is it any surprise that Apple’s stock price has shot up correspondingly over the past few years? As this article goes to press, the company has a market cap of close to $730 billion dollars.

Breakdown of Revenue, by Dollar Amount

Apple’s growth over the past few years has been primarily driven by the company’s iPod, iPhone and iPad devices, particularly the iPhone. Even though the company is known for its Mac computers, those have accounted for smaller and smaller portions of the company’s revenue since it started pumping out mobile devices and updating them on a yearly basis.

Breakdown of Revenue, by Percentage

Again, the iPod shows its dominance during the years that it first came out, and then the iPhone. The iPad doesn’t register too big of a dent, but it does add to Apple’s total revenue stream. During the 2005 to 2007 years, the iPod accounting for a large portion of Apple’s revenues, but as quickly as 2009, the iPhone starts becoming the dominant revenue stream.