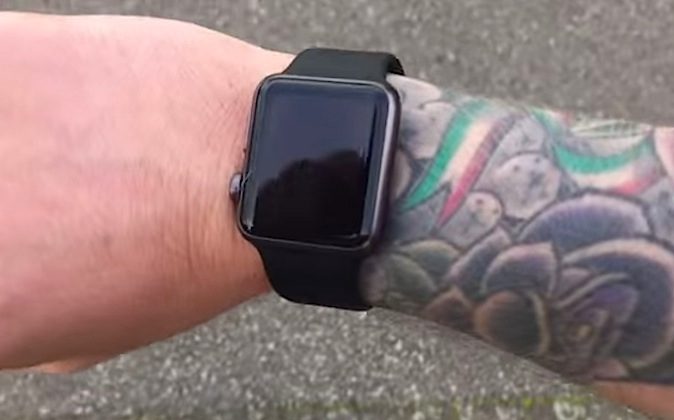 A screenshot of a video posted to YouTube by Michael Lovell showing how he has to frequently re-enter his password when wearing his Apple Watch on his tattooed arm. (Michael Lovell/YouTube)
Tech

Apple updated its support page last night, adding a section that warns Apple Watch owners that the device’s heart-rate monitor, which uses green and infrared light, can be interfered with by irregular skin surfaces, such as tattoos.

“Permanent or temporary changes to your skin, such as some tattoos, can also impact heart rate sensor performance,” the support page reads. “The ink, pattern, and saturation of some tattoos can block light from the sensor, making it difficult to get reliable readings.”

Apple made the admission a day after an Apple Watch customer posted a video—which later went viral—showing the device’s workout app repeatedly pausing when strapped onto his tattooed wrist.

The video also shows the watch locking and asking for the pass-code when worn on the tattooed wrist, and the user said that the detected heart-beat rate was “all over the place.”

“I had waited patiently since the announcement in September to own the watch only to be left completely disappointed after using it for only a few days,” Michael Lovell wrote in the video’s description section. “I am very disappointed that Apple never picked up on such problems during testing over many years.”

Apple recommends using an external heart monitor with Bluetooth as a substitute, and states that other functions like GPS can be used to track exercise progress.

When the Apple Watch was first released, some observers questioned whether the heart-rate monitor would work for people with darker colored skin—the company’s top executives, who formed an early test group for the device, were all white, and in light of the recently discovered problem, probably none had their wrists inked. No issues have been reported by wearers with naturally darker skin.