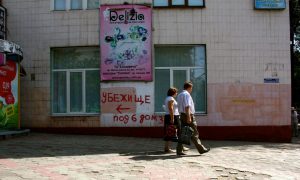 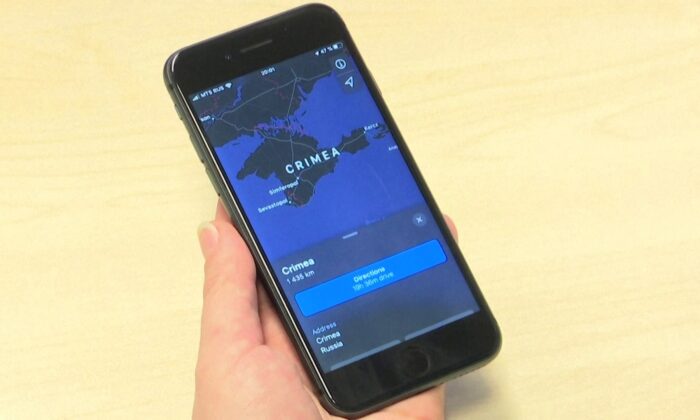 Screenshot from a video shows a smartphone displaying Crimea as a Russian territory on Maps in Moscow, Russia on November 27, 2019 (Video by Reuters)
US News

Apple appears to have changed its apps to show the annexed Crimean peninsula as part of Russian territory on Apple Maps and Apple Weather but only for users in Russia.  Users outside of Russia see Crimea as not being a part of any country. The change was made to satisfy Russian politicians who have requested that Crimea shows as a part of Russia.

Reuters reporters in Moscow who typed the name of the Crimean provincial capital Simferopol into Apple‘s Maps and Weather apps on Nov. 27 saw it displayed as “Simferopol, Crimea, Russia.” Users elsewhere–including in Ukraine’s capital Kyiv and in Crimea itself–see locations in Crimea displayed without specifying a country.

The BBC reported that Apple had been holding talks with Russia for several months on how Crimea should appear on Apple’s apps.  Russia’s lower chamber of parliament, the  State Duma described the way Crimea was shown before the change as “inaccuracy,” says BBC.

According to the statement posted on the State Duma’s website, the Chairman of the Committee on Security and Corruption Control, Vasilii Piskarev, met with Daria Ermolina, who represents the interests of Apple in Russia, on Nov. 27. The Apple representative informed the Chairman that the inaccuracy had been removed.

“Piskarev noted that Apple fulfilled its obligations and brought the applications on its devices in compliance with the requirements of the Russian legislation,” the statement says.

The BBC reported that Piskarev said that apple representatives were reminded that showing “Crimea as part of Ukrainian territory was a criminal offense under Russian law, according to Interfax news agency.”

Ukraine’s foreign minister, Vadym Prystaiko, responded to Apple on Twitter, saying, “Let me explain in your terms, Apple. Imagine you’re crying out that your design and ideas, years of work, and piece of your heart are stolen by your worst enemy, but then somebody ignorant doesn’t give a damn about your pain. That’s how it feels when you call Crimea a Russian land.”

Let me explain in your terms, @Apple. Imagine you're crying out that your design & ideas, years of work & piece of your heart are stolen by your worst enemy but then smb ignorant doesn't give a damn about your pain. That's how it feels when you call #Crimea a 🇷🇺 land.

In 2014 Russian forces invaded the Crimea peninsula, and after that held a controversial local referendum in which “Crimeans voted to join the Russian Federation,” according to the Council of Foreign Relations.  The referendum was called illegal by the United Nations General Assembly, however, Russia annexed the Crimea peninsula despite criticism.

The EU and the United States do not recognize Crimea as Russian and have imposed sanctions against the peninsula and individuals they accuse of violating Ukraine’s territorial integrity.