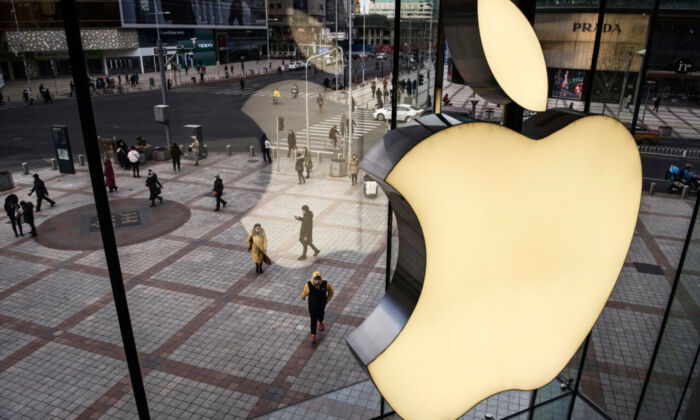 The Apple logo is seen on the window at an Apple Store in Beijing, China, on Jan. 7, 2019. (Kevin Frayer/Getty Images)
US-China Relations

Apple’s CEO Tim Cook recently became the chairman of an advisory board at the business school under China’s prestigious Tsinghua University, as the tech giant faced criticism for caving in to the Chinese regime’s censorship rules owing to its business interests in China.

Cook’s role at the board was to make Tsinghua’s School of Economics and Management a world-class institution during his three-year stint, according to the school website’s report on an advisory board meeting held on Oct. 18. Cook hosted the meeting with 35 members in attendance.

The advisory board, established in 2000, comprises of roughly 70 business leaders and scholars from the United States, Europe, and Asia, as well as Chinese Communist Party officials. Chinese Vice Chair Wang Qishan is also an honorary member.

Reports from the website show that Cook joined the advisory board in October 2013. China’s Vice Premier Liu He, Chinese tech conglomerate Tencent CEO Pony Ma, and Baidu Chairman Robin Li, who recently stepped down from his role at the cloud computing unit of internet giant Baidu, also served as board members in the past year.

Tsinghua receives substantial funding from the Chinese regime, including to conduct research benefiting the Chinese military.

According to the state-owned newspaper China Education Daily, the university received more than 100 million yuan ($14.53 million) from the Science and Technology Committee of China’s Central Military Commission—a Party organ that oversees the military—to advance AI capabilities for the military.

The work of the university’s “Military Intelligent High-End Lab,” an AI lab established in 2018, will be “guided by military needs” to make China an advanced AI country, according to the newspaper report.

Apple hasn’t responded to a media inquiry as of press time.

Sen. Josh Hawley (R-Mo.) took to Twitter on Oct. 21, criticizing Cook for his decision to chair the board.

“Will you teach a course on human liberties [and] Tiananmen Square? Maybe update students about what’s happening in Hong Kong Protests?” he asked.

Apple has recently come under criticism at home for toeing Beijing’s line in order to maintain its business in China.

On the same day the Tsinghua meeting took place, a bipartisan group of lawmakers wrote to Cook expressing concern over the company’s recent decision to pull a crowd-sourced app, HKmap.live, from its app store.

The app has gained popularity among Hong Kong locals for providing timely updates about the ongoing protests, which could help protesters avoid tear gas and clashes on the street. Apple dropped the app just one day after Chinese state media accused the company of protecting “rioters” and told Apple that its business prosperity in China was at stake.

Chinese factories assemble the majority of Apple iPhones. The greater China area also generated $52 billion of sales in 2018, which accounted for roughly one-fifth of the company’s global total in 2018, according to Apple’s financial earnings report.

The U.S. officials said the firm’s decision “to accommodate the Chinese government” was “deeply concerning.”

“We urge you in the strongest terms to reverse course, to demonstrate that Apple puts values above market access, and to stand with the brave men and women fighting for basic rights and dignity in Hong Kong,” they wrote in the letter.

Also, on Oct. 17, Cook met with Chinese market regulators in Beijing for “deep discussions” about issues such as corporate social responsibility and business expansion in the country, according to a statement from Chinese authorities.

Citing compliance with local laws, in early October, Apple removed the Taiwan flag emoji from its latest version of the emoji keyboard for users in Hong Kong and Macau. Beijing considers the self-ruled island of Taiwan a breakaway province and has threatened to claim it by force if necessary.

Apple has also been sending data, such as IP addresses, to Tencent, a social media and gaming company with government ties, as part of an iPhone and iPad security feature, according to media reports.