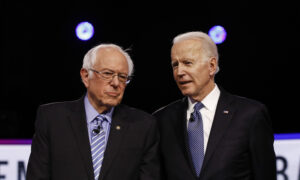 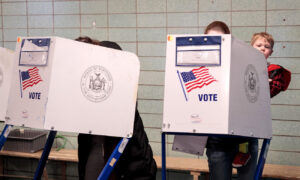 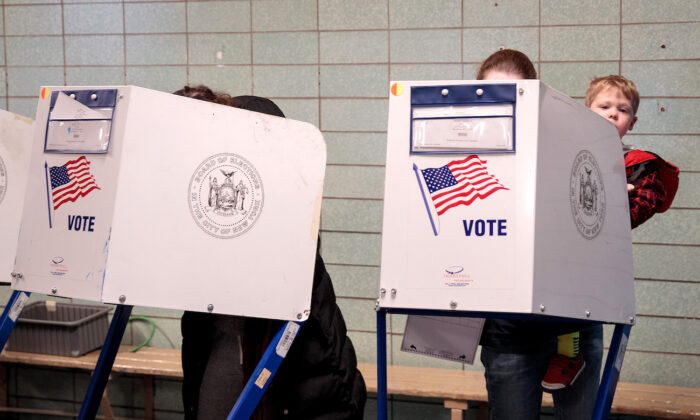 People vote at a polling site at a public school in New York City on Nov. 8, 2016. (Drew Angerer/Getty Images)
2020 Election

NEW YORK—Federal appeals court judges seemed inclined during oral arguments Friday to let New York’s Democratic presidential primary proceed next month despite state claims that it could threaten the safety of voters during a pandemic.

The three-judge panel of the 2nd U.S. Circuit Court of Appeals heard 90 minutes of arguments after a judge last week ordered the primary to take place despite an April decision by Democratic members of the state’s Board of Elections to cancel it.

Even without the presidential primary, elections were scheduled in all but two of the state’s 62 races for other elections, including congressional and state races.

The judges did not immediately rule, but they leaned forcefully against the state.

Some of them seized on the claim by Judith Vale, an attorney for the state, that Bernie Sanders and Andrew Yang could have remained on the ballot by withdrawing their announcements that they were suspending their presidential campaigns. Instead, lawyers sued to keep them on the ballot.

Circuit Judge Amalya L. Kearse asked what a candidate would have to do to reinstate a suspended campaign.

Vale said they would have to send a letter to the Board of Elections or “otherwise make clear they were un-suspending their campaign.”

“How does that differ functionally from what Senator Sanders did, which was to simply ask not to be taken off the ballot?” Kearse asked.

Vale said Sanders failed to announce he was lifting the suspension of his campaign.

Judge Dennis Jacobs noted that one way a candidate might decide to re-enter the race was if “they did quite well in the presidential primary in New York.”

Judge José A. Cabranes cited the constitutional right to vote and the First Amendment and questioned whether state or national leaders of the Democratic party had a say in the decision to cancel the primary.

He also said delegates play an important role in the Democratic convention and have made the difference in the selection of vice presidential candidates in the past.

“Doesn’t it seem odd to you that somehow these other political contests will go on and the only one that’s eliminated is the presidential primary? Doesn’t it suggest that there’s some particular objective here that’s perhaps not obvious to any of us?” Cabranes asked.

“No, no,” Vale responded. “This is all in the context of the pandemic.”

“Has any other state cancelled its presidential primary?” Cabranes asked.

“So that’s quite unusual, obviously, by definition,” Cabranes said.

Lawyers for Sanders and Yang noted that the state never spelled out when it changed the rules that candidates needed to lift the suspensions of their campaigns to remain on the ballot.

Attorney Jeffrey Kurzon, who sued on behalf of Yang and several would-be delegates, told the judges it was “appalling” that the election was canceled. He called it a “middle-of-the-game change” that was properly overturned by the lower court.