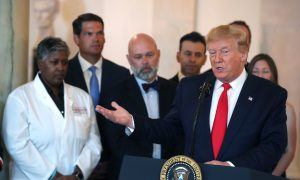 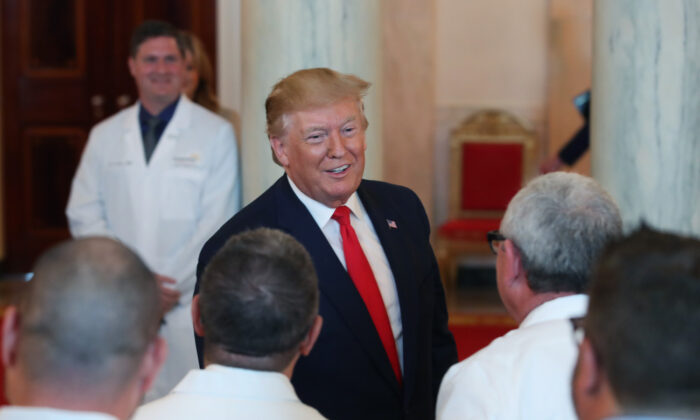 President Donald Trump greets healthcare workers after signing an executive order intended to improve quality and price transparency in healthcare during an event in the Grand Foyer of the White House in Washington, on June 24, 2019. (Mark Wilson/Getty Images)
Trump Administration

The U.S. Court of Appeals for the D.C. Circuit on Tuesday upheld a Trump administration rule that requires hospitals to disclose the prices they negotiate with insurers for a range of health tests and procedures.

The 2-0 decision by the appeals court means that American patients will have access to hospital pricing information starting on Jan. 1, 2021, helping them find the lowest costs and the highest quality of care when deciding on treatment.

“This transformative hospital price transparency rule has been fought at every step by the swamp and defenders of the status quo,” White House press secretary Kayleigh McEnany said in a statement.

“Today’s ruling should reassure the American people that President Donald J. Trump refuses to bow to the influence of special interests who would prefer to keep patients in the dark. This initiative is just one in a series of rules that will bring unprecedented price transparency to all elements of healthcare,” she added.

The Centers for Medicare & Medicaid Services (CMS) issued the transparency rules in November 2019, calling on hospitals to make public the often-secret rates that they negotiate with insurance companies for all services, drugs, and supplies. The Department of Health and Human Services (HHS) said in a statement at the time that hospitals must make public all standard hospital charges in a single data file.

The moves came as a result of Trump’s signing of an executive order in June 2019 over price transparency.

Hospitals, insurer organizations, and advocacy groups objected to the rules, and said that the Trump administration did not have authority to require the disclosures, which they held to be trade secrets. The hospitals also disputed that the policy would benefit consumers and lead to lower costs, arguing that compliance would instead be too burdensome and interfere with their care for patients.

The finalization of the rule prompted the American Hospital Association (AHA) to file a legal challenge. They argued that the White House didn’t have the authority to make the rule and in doing so had violated the First Amendment in its creation, and had acted in an “arbitrary and capricious” manner.

A federal judge ruled on June 23 that the Trump administration rules were legal. But the groups appealed on Oct. 15.

In the appeal, the groups said that the price transparency rules would pose a “herculean” and costly task of compiling health care costs, while reducing competition and causing confusion about patients’ out-of-pocket expenses.

Circuit Judge David Tatel, however, said concerns about the burdens “miss the mark,” and pointed to HHS Secretary Alex Azar’s findings that greater disclosures would benefit the “vast majority” of consumers and likely result in lower—not higher—prices.

“The Secretary weighed the rule’s costs and benefits and made a reasonable judgment that the benefits of easing the burden for consumers justified the added burdens imposed on hospitals,” Tatel wrote.

Melinda Hatton, the AHA’s general counsel, said the group was disappointed and hopes that a potential Biden administration would revise the rule and exercise “enforcement discretion” until the CCP (Chinese Communist Party) virus pandemic runs its course.

On Twitter, Azar praised the decision. “Big win for American patients today. The DC Circuit ruling is another major victory for President Trump’s transformative healthcare agenda. Starting January 1, Americans will have access to the actual prices paid for the most common hospital services,” he wrote.

The U.S. Chamber of Commerce supported the hospital groups, saying the rule could cause hospitals to demand higher prices for their services if they saw other hospitals charging more.