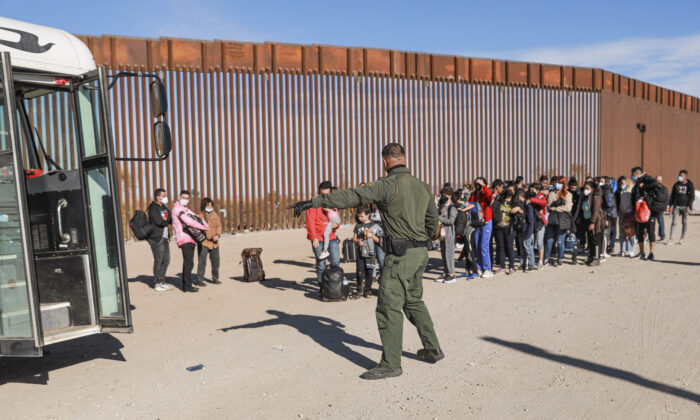 A Border Patrol agent organizes illegal immigrants who have gathered by the border fence after crossing from Mexico into the United States in Yuma, Ariz., on Dec. 10 2021. (Charlotte Cuthbertson/The Epoch Times)
Immigration & Border Security

The 5th U.S. Circuit Court of Appeals upheld an order from District Judge Matthew Kacsmaryk, a Trump nominee, finding that the administration erred in ending the program, which forces some asylum seekers to wait in Mexico for their claims to be heard.

Kacsmaryk ruled in August that Biden nominee Alejandro Mayorkas, the homeland security secretary, violated federal law when attempting to end the program in part by ignoring its benefits.

The ruling led to a reboot of the program, formally known as the Migrant Policy Protocols (MPP), but the government is simultaneously attempting to ax it for good.

Mayorkas announced on Oct. 29 that the program would end, despite the court order.

The government then informed the appeals court that the ongoing case was moot because of the announcement.

A three-judge panel on the court did not agree.

“Never mind that a case is moot only when the controversy between the parties is dead and gone, and the controversy between these parties is very much not dead and not gone. Never mind that the new memoranda simply reaffirmed the termination decision that the states had been challenging all along. And never mind that the Government’s theory of mootness would allow an administrative agency to permanently avoid judicial review by issuing an endless litany of new memos to ‘moot’ every adverse judicial ruling,” U.S. Circuit Judge Andrew Oldham, a Trump nominee, wrote for the panel in a 117-page ruling.

The Department of Homeland Security’s (DHS) proposed approach “is as unlawful as it is illogical,” he added.

Oldham also took the government to task for suggesting no court can review the decision to end the program.

“DHS claims the power to implement a massive policy reversal—affecting billions of dollars and countless people—simply by typing out a new Word document and posting it on the internet. No input from Congress, no ordinary rulemaking procedures, and no judicial review. We address and reject each of the Government’s reviewability arguments and determine that DHS has come nowhere close to shouldering its heavy burden to show that it can make law in a vacuum,” he said.

The ruling means the Biden administration must keep “Remain in Mexico” in place while the case, brought by the states of Texas and Missouri, continues.

The White House, the Department of Justice, and DHS did not respond to requests for comment.

“While this is a program that we disagree with, the injunction dictating court-ordered implementation remains in effect, so we continue to comply with it in good faith,” White House press secretary Jen Psaki told reporters in Washington on Tuesday.

Texas Attorney General Ken Paxton, a Republican, told The Epoch Times in an email that the court has spoken and “people around the country are feeling the effects of the poorly planned immigration changes Biden and Harris have forced upon us.”

“I fought to protect our southern border and won. I will not allow the safety of Texas residents to be left to the mercy of a reckless president,” he added.