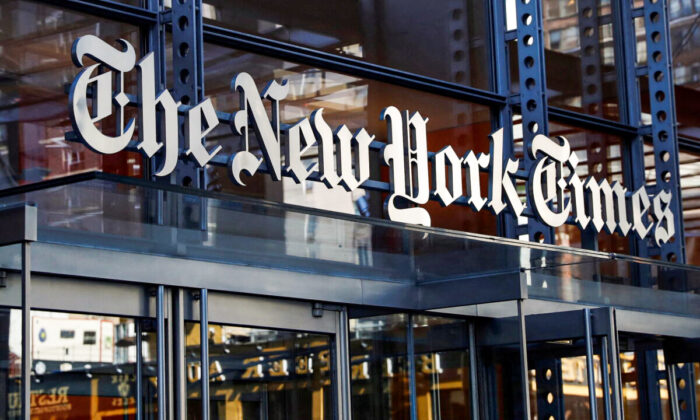 An appeals court panel in New York state has temporarily blocked an order that had prevented The New York Times from publishing documents from the investigative journalism organization Project Veritas.

Enforcement of New York Supreme Court Justice Charles Wood’s Dec. 23, 2021, order has been stayed until a full appeal can be heard, the panel of the court’s Appellate Division said in a brief decision.

The reasoning for the decision wasn’t given by Justices Robert Miller, Linda Christopher, Joseph Zayas, and William Ford, all appointed by Govs. David Paterson or Andrew Cuomo, both Democrats.

A New York Times spokesperson told news outlets in a statement, “We’re pleased with today’s decision to stop the enforcement of prior restraint while the case is being appealed and we look forward to explaining our position in the appeal.”

Elizabeth Locke, a lawyer representing Project Veritas, told The Epoch Times in an emailed statement, “We are pleased that the Appellate Division denied the Times’ overreaching request to vacate the order, and we are confident that it will ultimately conclude that the Supreme Court’s decision—that the Times violated Veritas’ substantial rights by acquiring and publishing attorney-client privileged materials in the midst of ongoing litigation—was entirely correct.”

The case centers on documents the NY Times says it obtained that outline legal strategies Project Veritas has discussed in the past. Project Veritas says the documents contain privileged information and shouldn’t have been published, particularly as a defamation lawsuit against the newspaper proceeds in New York courts. The New York Times has said the publication of the documents was a mistake, but it opposed the ruling that blocked the paper from publishing them.

Wood has said that the attorney-client relationship between lawyers and Project Veritas was undermined by the NY Times making public the memoranda, and noted that the paper published them before waiting until a deadline a reporter gave Project Veritas. He also ordered the paper to return the legal memos to Project Veritas.

The NY Times also has claimed that Wood’s order was unconstitutional because it amounted to blocking the paper’s reporters from doing their job.

“The use of prior restraint to prohibit newsgathering and block the publication of newsworthy journalism is unconstitutional. No libel plaintiffs should be permitted to use their litigation as a tool to silence press coverage about them,” the paper’s spokesperson said.

Locke told The Epoch Times in an earlier email that the description of the situation as prior restraint “is utter nonsense,” noting that the paper had already published the communications.

“Moreover, even if this were a prior restraint (it is not),” she said, “there are certain circumstances where the law permits a court to enjoin the publication of materials before it happens—including, for example, by a protective order in litigation between litigants to prevent the use and dissemination of attorney-client protected materials.”