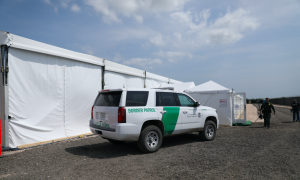 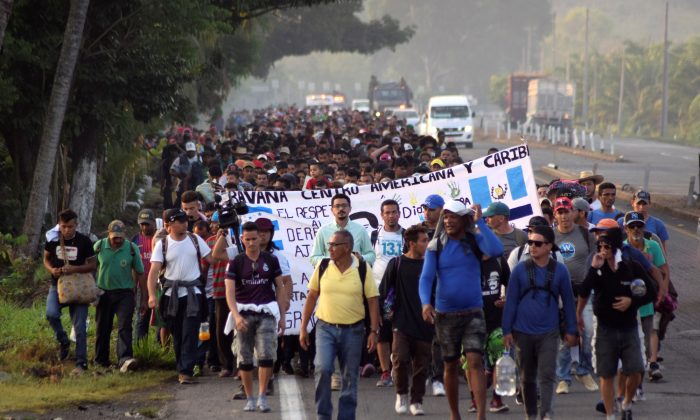 Migrants from Central America and Cuba walk on a highway during their journey towards the United States, in Tuzantan, Chiapas state, Mexico, on March 25, 2019. (Jose Torres/Reuters)
US News

A federal appeals court has granted a request by the Trump administration to send asylum-seekers back to Mexico while they wait for a court to process their claims—a temporary victory for the president on the issue of immigration.

The Ninth Circuit Court of Appeals on May 7 reversed a decision by a San Francisco judge that would have blocked the policy. In their ruling, the judges approved the policy (pdf), partly due to the Mexico government’s commitment to ensure the safety of asylum seekers who are returned to that country.

“The plaintiffs fear substantial injury upon return to Mexico, but the likelihood of harm is reduced somewhat by the Mexican government’s commitment to honor its international law obligations and to grant humanitarian status and work permits to individuals returned under the MPP,” the judges ruled. “We are hesitant to disturb this compromise amid ongoing diplomatic negotiations between the United States and Mexico because, as we have explained, the preliminary injunction (at least in its present form) is unlikely to be sustained on appeal.”

NEW: The 9th Circuit ruled the Trump admin can continue enforcing the “remain in Mexico” policy for some Central American asylum seekers while the case proceeds on appeal: https://t.co/AJHro8Sy6P Previously from @Haleaziz on this: https://t.co/rdYO1TvlbO pic.twitter.com/d0eksKX7J4

Although all three judges agreed to reverse the lower court’s injunction, two of the judges appeared to disagree with some or all of the government’s arguments for establishing the policy, in their judgment.

The policy, known as the Migrant Protection Protocols (MPP), was enacted in Jan. 24, as an attempt to curb the flow of meritless asylum claims and stop thousands of illegal immigrants from being released into the country while they await a court hearing, often never to be seen again.

The MPP was first trialed at the San Ysidro border crossing between San Diego and Tijuana, Mexico, but was expanded to the points of entry in Calexico, California, and El Paso, Texas, with plans to further extend it to other border crossings as well.

After the policy was put in place, 11 Central Americans and legal advocacy groups initiated a lawsuit against the Trump administration, known as the case Innovation Law Lab v. Nielsen.

On April 8, San Francisco-based U.S. District Judge Richard Seeborg ruled in favor of the Central Americans and advocacy groups, and ordered the policy to be suspended as of April 12 (pdf).

Seeborg, an appointee of former President Barack Obama, said in his ruling that the MPP violates U.S. law by failing to evaluate dangers migrants face in Mexico—which attorneys for the civil liberties groups have argued.

They say the policy puts asylum-seekers’ lives at risk by forcing them to wait in Mexico, which is plagued with crime and violence.

Meanwhile, the government called the ruling erroneous, arguing that it endangers the public during a humanitarian crisis at the U.S.–Mexico border. The White House subsequently appealed Seeborg’s order on April 10 (pdf).

The May 7 ruling allows the policy to be in place while the appeal case is litigated, which is expected to take months and possibly years. The case could possibly end up in the Supreme Court.

The MPP, which is overseen by the Department of Homeland Security, is an “unprecedented” move aimed at addressing the “humanitarian and security crisis at the southern border,” former DHS Secretary Kirstjen Nielsen said in January, when the policy first took effect.

“This humanitarian approach will help to end the exploitation of our generous immigration laws,” she said at the time.

Nielsen, who left her role with the Trump administration last month, said the policy would allow the DHS to more effectively assist legitimate asylum-seekers and individuals fleeing persecution, as migrants with non-meritorious or even fraudulent claims would no longer have an incentive to make the journey.

Moreover, the policy is also aimed to ease the overwhelmed Border Patrol facilities. CBP said agents encountered over 103,000 individuals on the southwestern border in the month of March. Of those, 92,000 were Border Patrol apprehensions—an increase of 35 percent compared to February.

The agency also said that for the first half of fiscal 2019, agents arrested over 385,000 illegal immigrants at the southwest border, more than double the apprehensions during the same period last fiscal year.

“I have never witnessed the conditions we are facing on the southwest border. This is not a manufactured crisis,” said Rodolfo Karisch, chief Border Patrol agent for the Rio Grande Valley sector, at a Senate hearing on April 9.

“On average, we apprehend 1,000 illegal border crossers per day—roughly the capacity of 17 commercial buses.”

Epoch Times Reporter Charlotte Cuthbertson and The Associated Press contributed to this report.