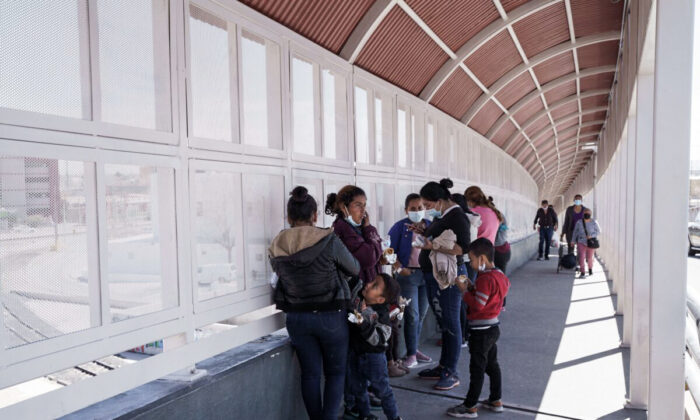 A group of illegal immigrants rapidly deported from the United States under Title 42 wait on the Mexican side of the Paso del Norte International Bridge between El Paso, Texas, and Ciudad Juarez, Mexico, on March 10, 2021. (Paul Ratje/AFP via Getty Images)
Judiciary

A federal appeals court on Sept. 30 preserved the Biden administration’s ability to use a Centers for Disease Control and Prevention (CDC) order that allows White House officials to expel illegal immigrants due to the COVID-19 pandemic.

The ruling from the U.S. Court of Appeals for the D.C Circuit comes after a federal judge on Sept. 16 issued a time-delayed order to prevent the Biden administration from enforcing Title 42. That order was set to go into effect on Thursday.

The Title 42 policy was first issued in March last year by the CDC under former President Donald Trump, which cited the need to limit the spread of the CCP (Chinese Communist Party) virus.

“If the Biden administration really wants to treat asylum seekers humanely, it should end this lawless policy now and withdraw its appeal,” American Civil Liberties Union (ACLU) attorney Lee Gelernt said in a statement. “We will continue fighting to end this illegal policy.”

In his original ruling against the Biden administration, Judge Emmet Sullivan of the U.S. District Court for the District of Columbia wrote that the public health law the Title 42 policy is based on does not authorize the expulsions of migrants.

Expelling asylum seekers denies them the “opportunity to seek humanitarian benefits” they are entitled to under immigration law, he wrote.

Thursday’s ruling comes as Biden faces mounting criticism from both sides of the political aisle over his handling of the influx of illegal crossings at the U.S.–Mexico border. The president has presided over what is on track to be the worst border crisis in U.S. history in terms of the number of illegal immigrants that U.S. agents and officers have encountered. The number topped 200,000 in both July and August.

Counties along the southern border have found COVID-19 positivity rates of up to 40 percent in illegal immigrants, sparking concerns over their being sent by federal authorities to communities across the United States when potentially COVID-19 positive.

The Biden administration has defended the Title 42 policy as being necessary to curb the spread of COVID-19, the disease caused by the CCP virus.

Psaki, responding to a question on Sept. 20 from a reporter on whether border patrol officials ask to see proof of vaccination against COVID-19 or negative test results “if somebody walks into the country, right across the river,” said illegal immigration is not comparable to foreign nationals who arrive by airplane to the United States.

The question was prompted by the White House announcement on Monday that all foreign visitors need to be vaccinated and present proof of their vaccination before boarding a U.S.-bound flight. White House COVID-19 coordinator Jeff Zients said at a press conference that individuals also must show a negative COVID-19 test at least 72 hours before flying.

“They’re not intending to stay here for a lengthy period of time. I don’t think it’s the same thing,” she added.