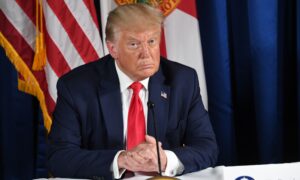 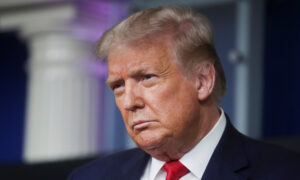 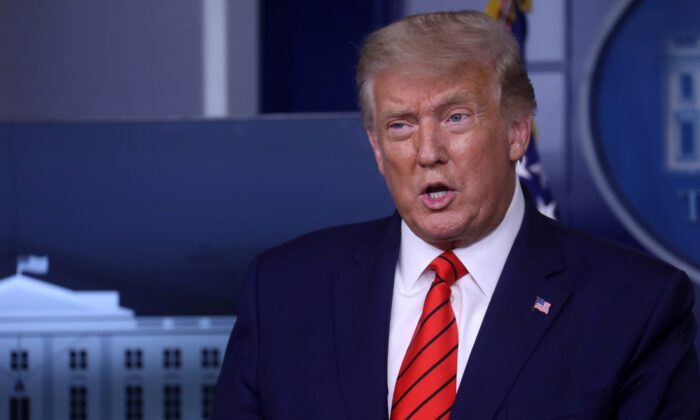 President Donald Trump responds to questions from reporters during a news conference at the White House in Washington on Aug. 31, 2020. (Leah Millis/Reuters)
US News

A federal appeals court has granted President Donald Trump’s request to hold a lower court’s ruling that would have allowed the Manhattan district attorney to enforce his subpoena for the president’s tax returns.

The 2nd Circuit Court ruling on Tuesday allows Trump to temporarily shield eight years of his tax returns and financial documents from being released to New York County District Attorney Cyrus Vance Jr. while the president appeals the district court decision. Vance has been seeking the documents as part of a grand jury probe.

The appeals court also set a Sept. 25 hearing to allow the parties to argue whether Trump’s claim that the grand jury subpoena is overbroad and issued in bad faith is plausible. U.S. District Judge Victor Marrero on Aug. 20 dismissed the claim, saying that Trump’s newest challenge was a roundabout way for the president to invoke immunity from judicial processes.

Earlier on Tuesday, the parties appeared before the appeals court for a brief hearing to argue whether a stay on the district court’s ruling should be granted pending the appeal. During the hearing, Trump’s lawyer told the judges that absent a stay, the president would escalate the dispute to the Supreme Court.

“We’ll be in a new round of problems at that point. And I think it’s fair to say there are innumerable people who might want to make such requests,” William Consovoy, the president’s lawyer, told the court.

Meanwhile, the counsel for the Manhattan district attorney’s office, Carey Dunne, told the court that “the toothpaste can be put back into the tube” if the court later upheld Trump’s latest complaint and the documents had already been turned over to the district attorney.

“The remedies can include not just the destruction or return of the documents, [or] striking of testimony, but yes, … courts have required the impaneling of a new grand jury so that the new grand jury is not tainted by any exposure to the earlier materials,” he said.