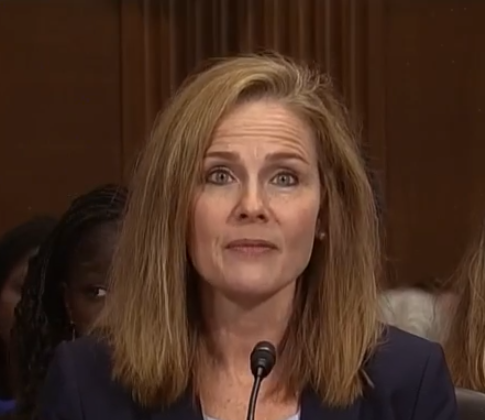 Amy Coney Barrett at her confirmation hearing for the 7th Circuit Court of Appeals in Washington on Sept. 6, 2017. (Public Domain from C-Span)
US News

A conservative judge on President Donald Trump’s shortlist for Supreme Court nominees has resurrected a lawsuit from a male Purdue University student who faced a campus “kangaroo court” that convicted him of sexual improprieties.

The legal precedent could be used in other campus sexual abuse cases to guarantee greater procedural fairness for accused persons. Campus tribunals are notorious for not treating accused individuals, especially men, fairly by denying them the right to cross-examine and impeach the credibility of accusers, among other things.

The judge is Amy Coney Barrett, who was appointed to the 7th Circuit Court of Appeals in 2017 after Trump nominated her. The confirmation battle made headlines when Sen. Dianne Feinstein (D-Calif.) and others attacked her because she’s a Roman Catholic. During the confirmation process, Barrett promised not to call upon her religious views when deciding court cases.

Barrett was one of the finalists on Trump’s list of prospective Supreme Court nominees in 2018. Ultimately, the president nominated Brett Kavanaugh, who was eventually sworn in after what was probably the most bruising high court confirmation battle in U.S. history. When the next vacancy occurs, she likely will be a serious contender for the nomination.

During the Kavanaugh confirmation process, on Oct. 2, 2018, a reporter said to Trump that his son, Donald Trump Jr., had remarked that in the #MeToo era, he feared more for his sons than his daughters.

The president said it was “a very scary time for young men in America.”

In the case at hand, on June 28, Barrett and two other female judges on a circuit court panel fired a shot across the bow at the politically correct academic establishment, which has a history of believing female accusers in campus sexual abuse cases—at all costs. The circuit court took the case on appeal from the U.S. District Court for Northern District of Indiana.

The ruling could foreshadow a sea change in judicial attitudes toward campus sexual assault and harassment tribunals, which, during the Obama era, were under pressure to convict accused men at the expense of basic procedural fairness.

U.S. Department of Education rules created by the Obama administration encouraged the creation of Kafkaesque courts to try college and university students, overwhelmingly men, for sexual misconduct. Accused students were generally presumed guilty and panels passing judgment on them denied them due process by applying the relatively weak civil law standard of the preponderance of evidence, instead of the tougher “beyond a reasonable doubt” criminal law standard. In September 2017, Education Secretary Betsy DeVos rescinded the Obama policy and issued guidelines encouraging schools to adopt a stronger “clear and convincing evidence” standard.

That has apparently made a difference.

“Across the nation, courts on the right and on the left are saying no,” wrote David French at National Review.

“They’re blocking biased sexual-assault adjudications, protecting basic fairness, and restoring a degree of sanity to colleges’ procedures. On Friday, it was the turn of the Seventh Circuit Court of Appeals to protect the Fourteenth Amendment, and an all-woman panel, led by Judge Amy Coney Barrett, established a precedent that could be used against woke college administrators nationwide.”

In this case, a male student identified only as John Doe learned that his former girlfriend, identified as Jane, had accused him of sexual improprieties. The tribunal found him guilty and suspended him for a year, causing him to automatically lose a Navy ROTC scholarship and be expelled from the ROTC program.

At one point in the proceeding, Doe was horrified to be presented with an official report that falsely claimed he had confessed to the allegations made against him, according to the court opinion written by Barrett.

Katherine Sermersheim, Purdue’s dean of students, informed Doe by letter that the university would be prosecuting him, even though Jane hadn’t initiated a formal complaint.

The accusations warranted “relatively formal procedures,” yet “Purdue’s process fell short of what even a high school must provide to a student facing a days-long suspension,” Barrett noted in the opinion.

Purdue never disclosed the evidence against Doe, an act that by itself was “sufficient to render the process fundamentally unfair,” she wrote.

The Obama-era policy gave Purdue “a financial motive for discriminating against males in sexual assault investigations” in order to protect its federal funding, Doe argued, according to the opinion.

“The resulting track record of enforcement would permit Purdue to signal its commitment to cracking down on campus sexual assault, thereby fending off any suggestion that it was not complying with the Department of Education’s directive.”

Around 2016, Purdue had been investigated twice by the department’s Office of Civil Rights and “the pressure on the university to demonstrate compliance was far from abstract.”

Doe’s allegations “raise a plausible inference that he was denied an educational benefit on the basis of his sex.”

The ruling by Barrett’s panel means John Doe will get another shot at a fair trial.