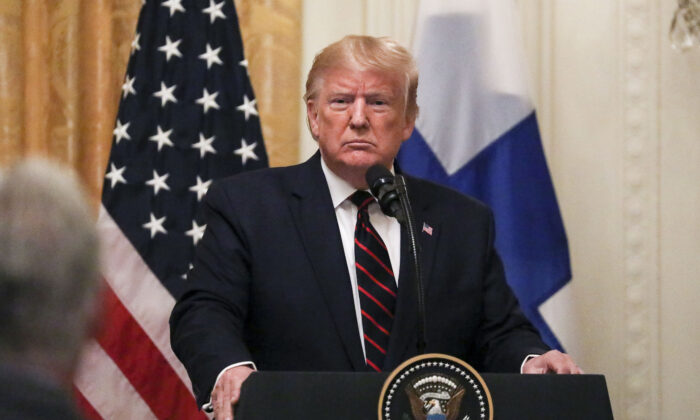 President Donald Trump at a press conference in the East Room of the White House in Washington on Oct. 2, 2019. (Charlotte Cuthbertson/The Epoch Times)
Politics

An appeals court on Oct. 7 temporarily blocked a subpoena issued by the Manhattan District Attorney for President Donald Trump’s tax returns, a last-minute reprieve coming just before the deadline for the subpoena.

The U.S. Second Circuit Court of Appeals in New York granted an emergency stay to Trump, who had asked the court to block the subpoena.

The emergency stay came after a judge in a lower court ruled that Trump couldn’t prevent his former accounting firm, Mazars USA, from giving the tax returns to Manhattan District Attorney Cy Vance.

Earlier on Monday, a federal judge ruled that Trump had to turn over eight years of tax returns, rejecting the president’s argument that it was unconstitutional to force a sitting president to release his financial information.

Trump’s legal team issued an emergency appeal of the decision to the Second Circuit Court of Appeals.

Taking to Twitter, the president wrote after the ruling was released: “The Radical Left Democrats have failed on all fronts, so now they are pushing local New York City and State Democrat prosecutors to go get President Trump,” he wrote. “A thing like this has never happened to any President before. Not even close!”

The Radical Left Democrats have failed on all fronts, so now they are pushing local New York City and State Democrat prosecutors to go get President Trump. A thing like this has never happened to any President before. Not even close!

NEW: Now that the court stayed his subpoena, Manhattan DA Vance wants the Second Circuit to fast-track Trump’s appeal to a hearing before the end of the week.

His proposed schedule is here. pic.twitter.com/uIjwlWPhdE

Vance responded later on Monday by requesting a fast-track of the legal situation.

Vance’s office is probing payments made to pornographic film actress Stormy Daniels, who has claimed to have received payments in exchange for her silence during the 2016 election after allegedly having an affair with Trump.

Efforts to get Trump’s financial information have been launched in multiple states. California passed a law requiring presidential candidates to release five years of tax returns to get on the ballot there but that law was blocked on Oct. 1.