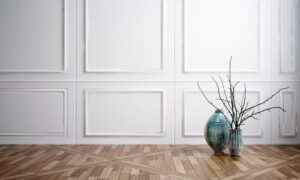 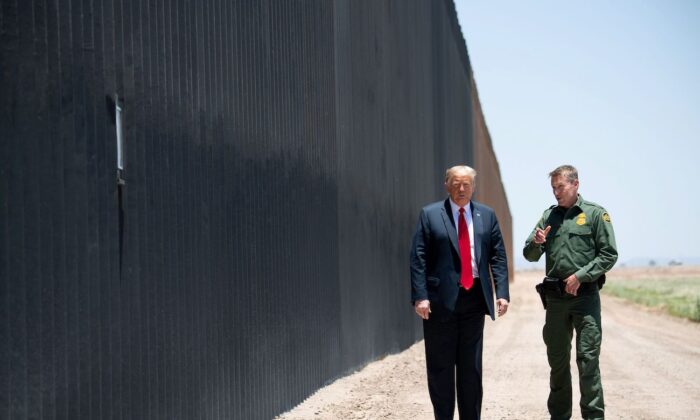 President Donald Trump speaks with Border Patrol Chief Rodney Scott (R) as they participate in a ceremony commemorating the 200th mile of border wall at the international border with Mexico in San Luis, Arizona, on June 23, 2020. (Saul Loeb/AFP via Getty Images)
US News

The 9th Circuit Court of Appeals on Oct. 9 said that President Donald Trump’s use of emergency powers to distribute millions of dollars in funding for the construction of a southern border is illegal.

The court upheld a December 2019 district court judgment in favor of a request from the Sierra Club and the Southern Border Communities Coalition against Defense Secretary Mark Esper, acting Homeland Security Secretary Chad Wolf, and others.

After Congress provided Trump $1.3 billion instead of his requested $5.7 billion for wall funding, Trump invoked the National Emergencies Act and declared an emergency at the southern border.

The panel, in a 2–1 decision, found the allocation of funds to be unlawful and said it went against the Constitution’s separation of powers clause.

“Particularly in the context of this case, where Congress declined to fund the very projects at issue and attempted to terminate the declaration of a national emergency (twice), we cannot interpret the statute to give the Executive Branch unfettered discretion to divert funds to any land it deems under military jurisdiction,” wrote Chief Circuit Judge Sidney Thomas, a Clinton appointee, in the ruling.

“As demonstrated by this case, this would allow the Federal Defendants to redirect funds at will without regard for the normal appropriations process.

“Although we recognize that in times of national emergency we generally owe great deference to the decisions of the Executive, the particular circumstances of this case require us to take seriously the limitations of the text of Section 2808 and to hold the Executive to them.”

Gloria Smith, the managing attorney at the Sierra Club, one of the groups that was involved in the lawsuit against the border wall construction, told the Texas Tribune that other options are available for the Trump administration. She said that future battles are likely, including one in the Supreme Court.

“The administration, the Department of Homeland Security, needed to identify the provisions in the U.S. Code that it would rely on to take those monies,” she said. “As we started to learn that, and as we started identifying specific project sites, we would amend our complaint with more specificity. So there are offshoots of the main lawsuit.”

David Donatti, an attorney with the ACLU of Texas, told the paper that the Supreme Court may issue an emergency stay before the Nov. 3 election.

“They could do that, but they would need a majority of the court to do it. But because at the moment we only have eight justices, we have to see how that would shake out,” he said.

In 2020, the Trump administration has picked up the pace of border wall construction, nearly doubling the rate of building since the start of the year. According to recent figures released by the Customs and Border Protection, officials are on track to finishing about 450 miles by the end of the year. So far, about 341 miles have been built.