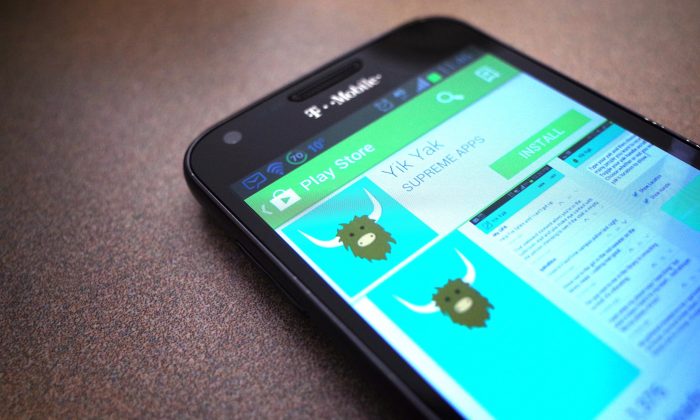 The mobile app Yik Yak allows users, mostly college students, to send anonymous messages that can be read by anyone with a smartphone within a 10-mile radius.

The free app has exploded in popularity on college campuses across America, as students use it to see what the community is saying and to share thoughts anonymously. Users can write up to 200 words in a post, called a “yak.” They can also reply to posts and vote a post up or down. A post that has been downvoted to -5 is then deleted.

But while Yik Yak grows more popular, it has also come under greater controversy, as various colleges have seen dozens of shooting and violence threats in recent months. The students who make the threats on the app are tracked down by police, arrested, and often face charges.

For instance, in early March, 19-year-old Matthew Mullen was arrested at Michigan State University within 45 minutes of posting a shooting threat on Yik Yak, according to local media.

5 Innovative Android Apps You Should Definitely Get

“After learning about the school shooting threats, I couldn’t help but think how scary it is to see how people react online when they know their identity is concealed,” said Ryan Lynch, a marketing major and senior at Arizona State University, who has used Yik Yak.

Lynch said, through Twitter messages on Sunday, “I used it for about 48 hours and already I knew that it was only a matter of time before people started using this wrongly.”

Anonymity does have its limits. Yik Yak’s guidelines state they retain GPS coordinates and IP addresses of users, which they will disclose to police in the event of an emergency, including bomb threats, school shootings, and suicide threats.

The app was created in 2013 by Tyler Droll and Brooks Buffington, who were recent graduates and fraternity brothers at Furman University in South Carolina. They had the idea of giving more college students a voice on campus after seeing only a handful of their classmates on Twitter.

For some, Yik Yak can be a positive experience. Calvin College student Lauren De Haan in Michigan wrote in a school paper editorial last October that the app was a fun discovery she made while visiting New York University, later finding out that the app had also spread to the Calvin campus.

“Whenever I need a good laugh, I just read the feed,” she wrote.

At the same time, for many students, Yik Yak can be a breeding ground for negativity and verbal abuse. On several campuses, including American University and State University of New York Brockport, racist posts on Yik Yak have upset students and sent faculty searching for ways to improve dialogue about race.

De Haan wrote that while she enjoyed some of the humor, anonymity also gave voice to plenty of insensitive comments.

“Sometimes we forget that even though this app is anonymous, the people reading the posts are not,” she wrote, “They are our roommates, classmates, and peers—real people with real feelings.”

Sometimes we forget that even though this app is anonymous, the people reading the posts are not.
— Lauren De Haan

In one notable exception, professors at Colgate University, in New York, have fought back with kindness. More than 50 faculty members have posted messages of encouragement or humor on the app. Some posts have even gotten over 100 upvotes, according to the school’s newspaper.

For instance, a user called Prof. Woods wrote: “Thanks to the students at Colgate for making my job fun. I’m sorry I can’t always return the favor, but you know I love ya.”

The company has privately held stock and was rumored to be valued at over $350 million by November last year. Its mascot, a furry yak, often tours college campuses in promotions called “Ride the Yak.”

Lynch believes the app is only a fad and lacks high growth potential. He observed it was mostly used by underclassmen looking to purchase alcohol or drugs, and positive messages were often downvoted and deleted.

“It’s one of those apps that went viral too fast and peaked equally fast,” he said.