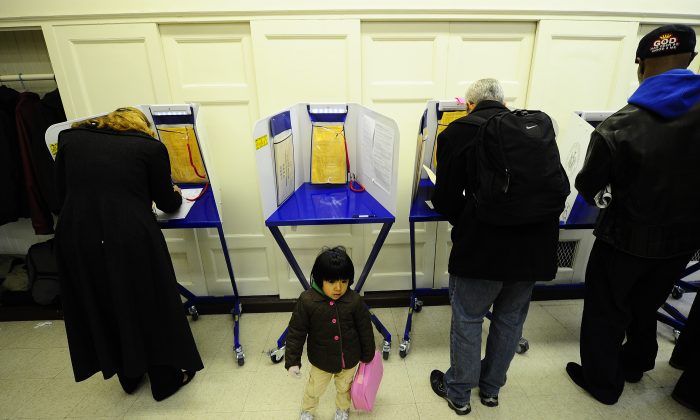 CUDDEBACKVILLE—Behind the dry, legal language of a letter from the office of New York Attorney General Eric Schneiderman to the Orange County Board of Elections lies a community that feels betrayed by a challenge to their rights as American citizens.

In a Sept. 22 letter Schneiderman inquired about a possible case of voter discrimination and intimidation involving at least 30 Chinese-Americans. The letter says their voter registration may have been challenged allegedly because they “have Asian names” and because they used their college dormitory address, 140 Galley Hill Road in Cuddebackville.

“We are concerned that students otherwise eligible to register and vote may have been denied the opportunity to participate in the current election cycle on the basis of their race and national origin,” the letter said.

The Attorney General’s office issued the letter in response to a complaint filed by a mother of one of the students whose voting registration was challenged. She sat down with Epoch Times to talk about how the students have been affected by this controversy and to help set the record straight about claims made in the press. In order to protect the privacy of her family, this woman prefers to remain anonymous. For the purpose of this article she is called “Sue.”

Sue noted that the challenge to students’ voting rights was first made in the press, in an Aug. 19 article in the Mid-Hudson News.

This online newspaper quotes Deerpark Supervisor Gary Spears saying, “Over all there were 60 or 68 new registrations in Deerpark this year of Chinese people. We are concerned, first of all if they are citizens.'”

You can’t assume someone is not a citizen on the basis of their having a Chinese name.
— Sue, Mother of student whose voting registration was challenged

In any case, Sue said, “The grounds for Spears’ challenge are clearly discriminatory. You can’t assume someone is not a citizen on the basis of their having a Chinese name.”

In interviews with the press, Spears also advanced another reason for challenging the students’ registration. An Aug. 20 article in the Times Herald-Record quotes him as saying, “”We noticed there were 30 new registrants at the same address, and all the alarms went off.” County records show there is a three-bedroom house at 140 Galley Hill Road, the address given by the students.

As Epoch Times has reported, this address is the location of the students’ dormitory at Fei Tian College. Fei Tian is a bilingual Chinese-English institution that is “committed to the preservation, development, and propagation of traditional arts and cultures,” the college website says.

On July 2 he visited 140 Galley Hill Road and met representatives of the college, according to sources.

Spears has also told Epoch Times that he believes two of the students whose registrations were challenged were green card holders.

Epoch Times investigated the claim. Two students did receive letters from the Orange County Board of Elections informing them that they are green card holders and thus not eligible to vote.

However, Epoch Times inspected the U.S. passports of the two students and found they are in fact U.S. citizens.

One has been a U.S. citizen since 2011 and the other since 2005. At press time, the Board of Elections was not available to comment.

Board of Elections Commissioner, David C. Green, said in a phone interview he could not comment on what happened, but he did say 28 of the 30 challenged voters are still active.

These 30 students are first time voters, Sue said. They have gone from excitement over exercising their right to vote to being shocked at the accusations made against them. Sue said, “They are made to feel like they have committed a crime.”

“The failure to resolve the challenges,” Sue said, “has deepened the students’ discomfort.”

Sue shared with Epoch Times a letter she wrote to State Assistant Attorney General Diane Lucas. She wrote, “Irresponsible comments made and actions taken by certain government officials against these people have left much confusion and outrage in the community.”

As a Chinese-American, she shares these feelings. “I find his [Spears’] actions humiliating, shameful, and shocking, and completely against the United States founding principles,” she wrote.

She shared three open letters written by Fei Tian two students and an alumnus that capture feelings she says are common among those whose right to vote was challenged.

Alumnus Hao Wang, in a letter published by the Times Herald-Record, wrote, “Would Supervisor Spears also have a problem with people whose last name is Martinez or whose first name is Vladimir?” Wang complained that Spears was “shamefully inciting tensions within the local community to score political points.”

“Many of my fellow classmates and friends who enrolled to vote were born and raised in the United States,” wrote Cindy Chi, “Like me, they may be of Chinese or Asian descent, but it does not make any of them less of a true American.”

In another letter, Han Ye wrote, “Rather than perceiving these voters as potential enemies, questioning their validity and even singling them out for media attack, shouldn’t a public official encourage them to participate in their local government?”

If the voting registration challenge was meant to intimidate the students at Fei Tian, Spears failed. According to Sue, in response to the challenges at least a score more Chinese-Americans from 140 Galley Hill Road have registered to vote.

Han Ye’s letter concluded, “As a U.S. citizen who has been discriminated against by my town supervisor, I don’t think it’s too much to ask for an open apology—for myself, for my school, and for the entire community.”