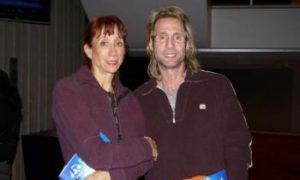 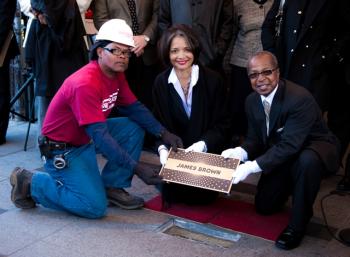 The first star of the Apollo Theater's Walk of Fame is installed for James Brown by (L-R) a construction worker, Apollo Theater's President and CEO Jonelle Procope, and Historian Billy Mitchell. (Aloysio Santos/The Epoch Times)
US

By Lina Berezovska
Print
NEW YORK—Apollo Theater began engraving its sidewalk with seven legendary names for its new Walk of Fame, which was unveiled Monday in celebration of the theater’s 75th anniversary.

“This is only fitting that we’re doing it now, because we’re celebrating the Apollo’s 75th anniversary,” said Jonelle Procope, President and CEO of the Apollo Theater, at the opening of the Walk of Fame.

The king of pop, Michael Jackson, and the queen of soul, Aretha Franklin, will be inducted into the Walk of Fame after the Apollo’s Spring Gala in June.

All of the honored artists share a common bond—performing at the Apollo Theater. For many, such as the renowned singers LaBelle and Fitzgerald, Apollo served as the launch pad for downstream success in the music business.

“My career began at the Apollo, so I’m humbled to be able to be a part of its rich and continued legacy,” singer-song writer LaBelle said in a statement.

“I started out at the Apollo, and it will always be a home to me,” Robinson said in his statement.

Apollo Theater’s first manager, Australian immigrant Frank Schiffman, kept the doors wide open for the black population in the oppressive environment of 1934. The racial tolerance provided a stage for the talented African-American amateurs to develop their skills and make their name heard within the community.