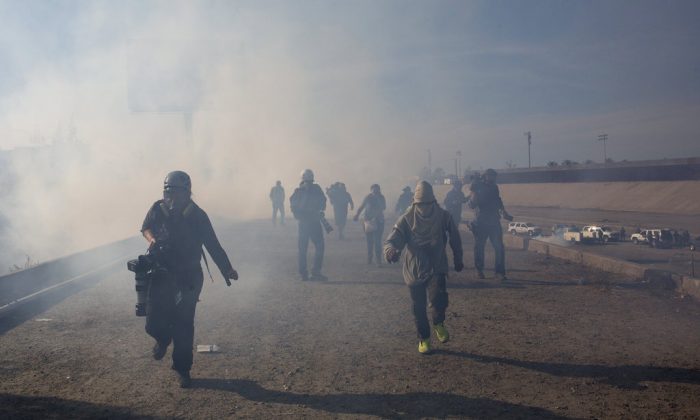 Migrants run from tear gas launched by U.S. agents, amid photojournalists covering the Mexico-U.S. border, after a group of migrants got past Mexican police at the Chaparral crossing in Tijuana, Mexico, on Nov. 25, 2018. (AP Photo/Rodrigo Abd)
US News

APNewsBreak: No One Arrested in Border Clash to Be Prosecuted

SAN DIEGO—No criminal charges will be filed against any of the 42 people associated with a caravan of Central American migrants who were arrested in a clash that ended with U.S. authorities firing tear gas into Mexico, The Associated Press has learned.

The decision not to prosecute comes despite President Donald Trump’s vow that the U.S. will not tolerate lawlessness and extensive preparations for the caravan, which included deployment of thousands of active-duty troops to the border.

Rodney Scott, chief of the Border Patrol’s San Diego sector, has said those arrested for illegal entry included 27 men, with the rest being women and children.

The incident occurred Sunday at the border in Tijuana, where thousands of caravan members have been arriving in recent weeks after fleeing poverty and violence in Central America. Most of them plan to seek asylum in the United States but may have to wait months because the U.S. government only processes about 100 of those cases a day.

As frustrations began to mount over the long wait, migrants marched to the border Sunday to appeal for the United States to speed things up. It turned unruly when four agents were struck with rocks or projectiles and authorities responded by launching tear gas and pepper spray balls to quell the unrest.

But in the end, none of the 42 people had charges brought against them for illegally entering the country or any other counts.

Customs and Border Protection, the Border Patrol’s parent agency, referred only two cases to the Justice Department for prosecution and charges were not filed because the accused had medical problems that prevented them from being held in San Diego’s detention center, according to a U.S. official familiar with the cases who was not authorized to discuss the matter publicly and spoke on condition of anonymity.

Many others were not referred to the Justice Department because they were children or parents accompanying children, the official said. In June, Trump retreated on the administration’s “zero-tolerance” policy on prosecuting illegal entries by generally exempting people who enter the county in families.

The other adults were not prosecuted because Customs and Border Protection didn’t have enough information to pursue charges, including the name of the arresting officers, according to the official, who said it was an extremely chaotic scene.

U.S. authorities are working on a new system to better record evidence if similar circumstances arise in the future, the official said.

The fate of the 42 immigrants remains unclear. Customs and Border Protection declined to discuss why charges weren’t filed but said they still may be subject to deportation.

“Depending on their country of citizenship and their case’s final disposition, the Border Patrol may turn those people over to Immigration and Customs Enforcement,” said spokesman Ralph DeSio.

Lauren Mack, a spokeswoman for Immigration and Customs Enforcement, said the agency could not provide information about the immigration status of the 42 arrested without names because it doesn’t track people affiliated with the caravan.