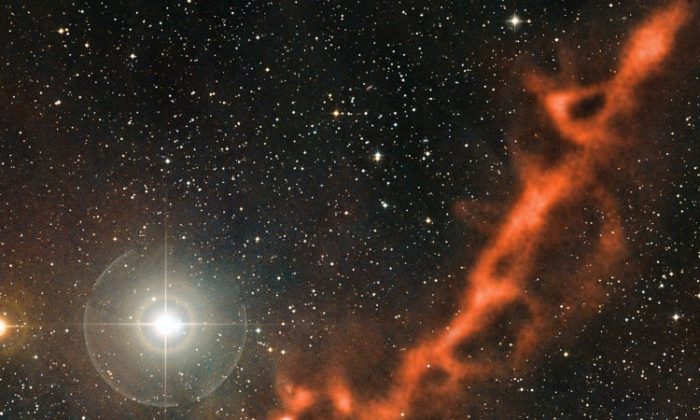 Located about 450 light-years away in the constellation of Taurus, this cold cloud of dust and interstellar gas stretches for more than 10 light-years, and appears unusually dark when seen in visible light due to the absence of massive stars.

APEX–a 12-meter telescope up in the Andes in Chile–works in conjunction with the Large APEX Bolometer Camera (LABOCA), which can detect wavelengths of about one millimeter, such as those emitted by these faintly glowing dust grains, which are at about -260 degrees Celsius.

In this image, we can see Barnard 211 (top right) and Barnard 213 (bottom left), which are long filaments in the cloud, named after American astronomer Edward Emerson Barnard, who catalogued them early last century.

New stars are born as the matter collapses and clumps due to its own gravity, with some accretions forming hot dense cores of hydrogen gas. Here, star formation is only visible using devices that can pierce the chilly dust.

The millimeter wavelengths from the dust are shown in orange, set against a background of stars seen in visible light. The two bright stars towards the left of the picture are φ Tauri and HD 27482, which is only partially visible.

The bright areas in Barnard 213 reveal that it has begun fragmenting to form stars, while Barnard 211 has yet to collapse as it is still an earlier stage of stellar evolution.