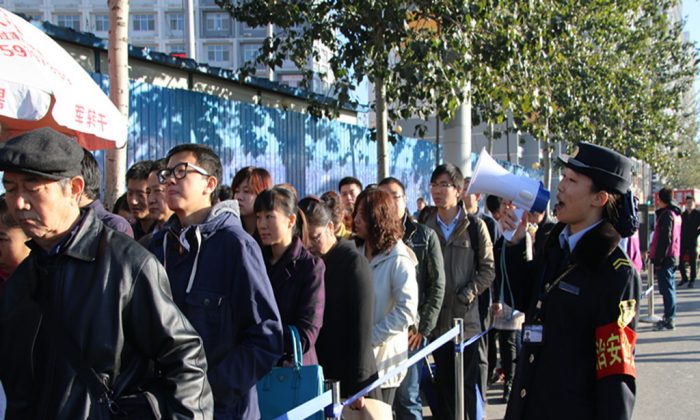 Passengers wait in line to take a subway during the ban on alternate days for odd and even license plates put in place for the APEC Summit, on November 3, 2014 in Beijing, China. Complaints among Beijing residents have grown louder concerning the inconveniences brought on by Beijing, which is seeking to make a good impression on foreign leaders. (ChinaFotoPress/Getty Images)
Asia & Pacific

As Beijing seeks to make a favorable impression on foreign leaders attending the Asia-Pacific Economic Cooperation (APEC) summit from Nov. 5 to 11, the city’s residents are complaining loudly about the extensive inconvenience.

Shipments, mail deliveries, and transportation in Beijing and the north China region will be impacted by traffic control from Nov. 3 to 12, according to the State Post Bureau. Express mail is likely to be delayed, and deliveries to the northern provinces of Inner Mongolia and Shanxi, and coastal Shandong Province may be delayed as well, the statement said.

The temporary traffic control prohibits general cargo vehicles from driving within the sixth ring road of Beijing, and bans odd- and even-plated cars on alternative days during the APEC period.

The delayed mail has caused lots of complaints on the Internet. “Hosting a meeting at the imperial city can impact three-quarters of northern China. What a nuisance!” remarked net user “Murong raccoon loves flower head children” on the twitter-like platform Sina Weibo.

According to state-run Beijing News, the food service staff for the APEC summit is able to bring the food from the kitchen to the dining table in 484 steps requiring 5 minutes and 45 seconds. The time was “accurately measured” to ensure the temperature and texture of the food, the report states.

The Netizen “Rangcai Duoji” objected, saying that the taste of the food for foreign leaders was a greater priority than the inconvenience of 21 million Beijing residents. “Why can’t they have such passion for serving the people?” he commented on Weibo.

An “emergency notice” from the major heat and electricity supplier TEDA Investment Holding in Tianjin City, 86 miles east of Beijing, is circulating on the Internet. It states the company will not supply heat until the APEC summit finishes.

The notice states the order is issued by the district government to ensure the air quality during APEC.

The temperature at night in Tianjin and Beijing has dropped to the upper 30s Fahrenheit in the past few days, and many netizens are criticizing the authority’s order as “too ridiculous.”

“People from different social communities, please help by calling for heat to be supplied to the people. I can’t bear the cold close to freezing at night!” remarked the Netizen “fat tomato.”

A notice for suspending milk delivery during APEC issued by a milk station in the Chaoyang District of Beijing is also circulating on the Chinese Internet. The notice states the milk delivery company decided to close from Nov. 3 to 11 due to Beijing traffic control.

All the institutions, including schools, government organizations, and so on, will close, and Beijing residents are encouraged by the authorities to travel out of Beijing.

Individuals staying in Beijing are also told to have as little outdoor activity as possible during APEC.

Ananth Krishnan, India Today’s China correspondent in Beijing, posted on his twitter on Nov. 3, “Beijing going into APEC overdrive. Notice in my apartment building says ‘Don’t go out often.’ Okay then.” Along with the post is a photo of a notice put up in his apartment building on the wall.

Beijing’s efforts at reducing air pollution have already showed some results, with clear skies and sunny weather on Monday. Being tired of the frequent smoggy days and terrible air quality, some Beijing people hope APEC lasts longer so that they can have clear skies longer, even if the summit brings lots of inconveniences.

“I seriously thank APEC, and hope you spend more time in China! I can ride my bike under a blue sky now, [and] hello sunshine,” wrote “Duhaili So-so” on Weibo.