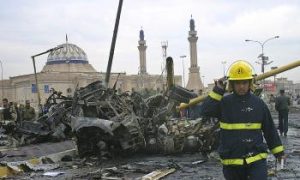 BOSTON—Children living in apartment complexes are exposed to second-hand smoke even when no one smokes inside their own unit, a recent study from MassGeneral Hospital for Children and the University of Rochester Medical Center found.

The study assessed data from more than 5,000 children between the ages of 6 and 18 to see if there was any relationship between housing type and smoke exposure. In general, the study revealed that children who were under 12, black and living under the federal poverty level had highest levels of cotinine, a chemical commonly used to measure tobacco exposure.

Controlling for factors such as poverty and age, children living in apartments had an increase in cotinine of 45 percent over those living in detached houses.

Exposure to tobacco smoke has been shown to cause respiratory infections, asthma and sudden infant death syndrome in children. Previous studies have shown that children with cotinine levels indicating even very low amounts of tobacco smoke exposure have delayed cognitive abilities and decreased antioxidant levels.

"This study is an important piece of evidence supporting universal smoke-free multi-unit housing," said Jonathan Winickoff, MD, MPH, of the MassGeneral Hospital for Children and the senior author of the study. "More and more landlords, in all 50 states, know that they can set a smoke-free policy for their buildings, and with 80 percent of the population not smoking, market demands strongly favor smoke-free status. When landlords set a completely smoke-free policy they will enjoy lower fire risk and insurance costs, lower clean up costs between tenants, and they will be fostering a healthier home for everyone in the building.”

"Hopefully this research and the movement towards smoke-free housing will open up programs and opportunities for more folks to quit smoking. Promoting the use of the free quit lines in every state is a great way to facilitate these efforts," said Karen Wilson, MD, MPH, an assistant professor of Pediatrics at the University of Rochester Medical Center’s Golisano Children’s Hospital.