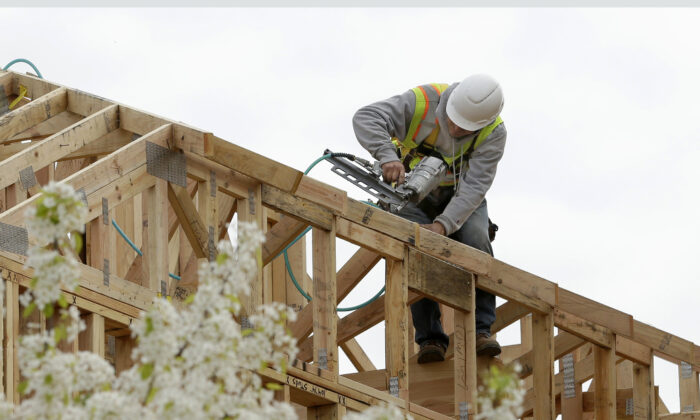 Work is done on an apartment building under construction in Sacramento, Calif., on Feb. 8, 2019. (Rich Pedroncelli, File/AP Photo)
Markets

Home construction saw a better-than-expected rebound in August after a contraction a month earlier, though the strength was all on the back of sharp gains in apartment building, while the single-family house sector saw declines.

Housing starts in the United States rose 3.9 percent in August to a seasonally adjusted annual rate of 1.615 million units, after falling by a revised 6.2 percent in July, according to a Sept. 21 Commerce Department report (pdf). Economists polled by Reuters expected an August rebound in housing starts to 1.555 million units.

Building permits—a leading indicator for future construction—climbed 6.0 percent in August to 1.728 million, the highest number since April 2021. The gains were mostly concentrated in the multi-family home segment, which saw permits rise 19.7 percent over the month, while single-family house construction permits rose just 0.6 percent.

“We conjecture that this strength in multi-family may be a response to the strong increase in asking rents and the low vacancy rates in rental units,” said Conrad DeQuadros, senior economic advisor at Brean Capital in New York.

The Commerce Department report also showed that the number of houses authorized for construction but not yet started in August rose by a monthly 3.7 percent to one of the highest readings on record, suggesting builders remained hesitant to embark on new projects.

Homebuilder confidence inched up in September after falling to its lowest reading in 13 months in August, according to the NAHB/Wells Fargo Housing Market Index (HMI), although optimism was capped by hiring difficulties and building material supply chain issues.

Job openings in the United States surged to a record high of more than 10 million on the last day of July while hiring lagged that figure by more than 4 million, suggesting the economic recovery was being held back as businesses struggled to fill vacant positions.

While construction hiring in July rose to 384,000 from 371,000 in June, according to the Labor Department’s Job Openings and Labor Turnover Survey (JOLTS), there were 321,000 unfilled openings in construction.

“While building material challenges persist, the rate of cost growth has eased for some products, but the job openings rate in construction is trending higher,” Robert Dietz, the NAHB’s chief economist, said in a statement.