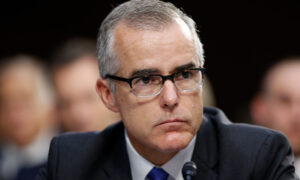 Sen. Lindsey Graham (R-S.C.), the head of the Senate Judiciary Committee, is projected to win reelection for a fourth time, according to The Associated Press.

Graham defeated Democratic challenger Jaime Harrison, fending off the most significant challenge of his political career.

Harrison, 44, is the former chair of the South Carolina Democratic Party who also worked as a lobbyist. Graham, meanwhile, has spent 26 years in Congress—both as a senator and House representative.

Graham likely benefitted from pivoting to becoming one of President Donald Trump’s most ardent defenders in the Senate, often going on Fox News to sing the president’s praises. Graham came into the spotlight about a year ago when he defended Trump against allegations foisted by House Democrats during their impeachment inquiry of Trump before the Senate acquitted him.

But several years ago, Graham was a vocal critic of then-candidate Trump and his nascent presidency.

The longtime senator also may have received a boost during the fight to confirm Supreme Court Justice Amy Coney Barrett’s nomination last month.

About a week before Election Day, Graham said he believed Barrett helped him defend against Harrison’s challenge.

“How do you say yes? Yes,” Graham said when he was asked if Barrett’s confirmation helped secure his seat. “I feel good about it.”

Graham faced early difficulty in the race as Harrison was able to amass a war chest of about $100 million, although Graham raised about $67 million.

Earlier in the night, Sen. Cory Gardner (R-Colo.) was defeated in Colorado by former Governor John Hickenlooper, giving the Democrats their first victory of their election battle to retake the Senate.

Gardner, a first-term Republican long seen as his party’s most vulnerable Senate incumbent, lost to Hickenlooper in a formerly Republican state where demographic changes have increasingly favored Democrats in recent years, according to projections by television networks and Edison Research.

All told, 35 of the Senate’s 100 seats are up for election. “There are dogfights all over the country,” McConnell, the top Republican in Congress, said at a campaign stop earlier in the week. He described the possibility of Republicans holding onto the Senate majority as a “50-50 proposition.”