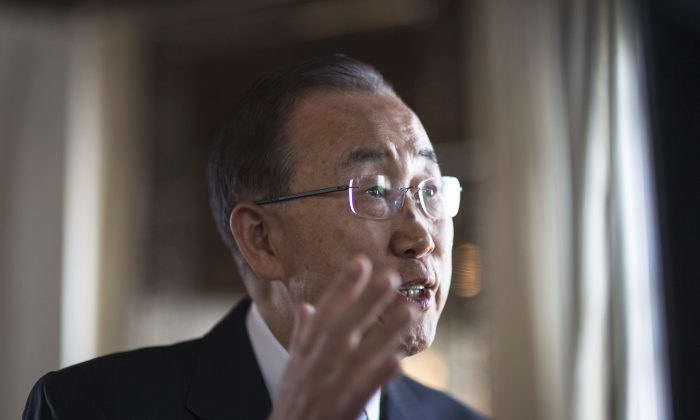 MARRAKECH, Morocco—U.N. Secretary-General Ban Ki-moon says he’s observed a change in Donald Trump’s rhetoric following the election and that he and the U.S. president-elect have agreed to meet face-to-face.

In an interview Wednesday with The Associated Press, Ban said Trump is showing signs of pulling back from his tough statements during a “difficult political campaign.”

“Slowly he is now showing some signs of changes from what he had been saying,” Ban said. “I hope he will be engaging closely with world leaders and he will be closely working together with the United Nations.”

Trump’s campaign promises included building a wall along the Mexican border, but he appeared to soften his stance after the election, saying in an interview with “60 Minutes” he may be amenable to a fence along some parts.

“I’m asking world leaders not to erect walls,” Ban said on the sidelines of U.N. climate talks in Marrakech, adding he would meet with Trump to discuss “all the matters of our common concern.”

Reflecting on the state of the world as he prepares to leave office, Ban said a surge in nationalism and populism has resulted in some “changes in the political scene around the world, particularly in Europe and now in the United States and some in Asia, too.”

He said he thinks it has to do with people feeling angry and disheartened by economic inequalities and that during his 10 years as U.N. secretary-general he has urged world leaders to pay more attention to the concerns of their citizens.

Looking back on his tenure, he said it’s been a very tough but rewarding experience.

“As a former secretary-general of the United Nations I cannot be indifferent to world affairs,” he said. “And if needed I’ll try to find some way … as a private citizen to raise my voice.”