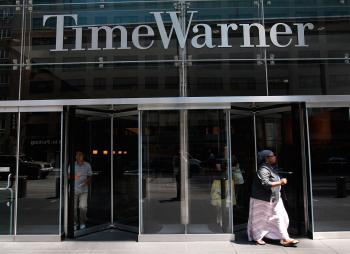 The entrance of The Time Warner Center in New York City is seen on Aug. 6, 2008. (Chris Hondros/Getty Images)
Business

AOL: A Thorn in Time Warner’s Side?

AOL’s revenues declined by 16 percent, and net income decreased by 29 percent, mainly due to a decrease in subscriber count as the company transitioned to offer free e-mail accounts in an effort to boost advertising revenues.

In recent years, Time Warner has made no efforts to hide its intentions of finding a potential buyer for its struggling AOL division. According to CNN, Time Warner this week made tax and legal preparations possibly for a breakup or sale of the Internet company.

Former AOL Chairman Steve Case’s vision of a unified print, broadcast, and online media company has been deemed anything but a success story by analysts. The 2000 purchase of Time Warner by America Online for $164 billion was followed by years of decreasing profitability at AOL. The advent of broadband Internet forced the company to change AOL’s focus, from a primarily dial-up internet service provider to a Web content portal. With the growth of the World Wide Web, AOL hoped to capture a piece of the rapidly growing online advertising revenue.

As early as 2005, many felt that the union of Time Warner and AOL were a mistake.

In a 2005 op-ed column on the Washington Post, Steve Case, former AOL Chairman who orchestrated the merger, stated that, “Although I played a key role in bringing AOL and Time Warner together six years ago, it's now my view that it would be best to ‘undo’ the merger by splitting Time Warner into several independent companies and allowing AOL to set off on its own path.”

Case noted that AOL’s “merger of the century quickly became widely derided as the worst merger in history.”

Time Warner’s struggles—or rather, the lack of anticipated growth—partially cost the jobs of former Chairmen Case and later, Dick Parsons. Now, Chairman Jeff Bewkes is tasked with attempting to drive growth, the first step of which was a restructuring of AOL into two businesses—a subscriber-based ISP and an advertising portal. Time Warner Cable is also scheduled to spin off from Time Warner by the end of 2008.

On a call with analysts on Wednesday to discuss second quarter financial results, Bewkes noted, “We have the ability to do something strategic with either of these two businesses (AOL and Time Warner Cable) today.”

With the shakeup or possible sale of AOL, perhaps Time Warner could finally devote its energy to what it does best: broadcasting and entertainment. After all, Warner Bros. Studios’ recent blockbusters “Sex and the City” and “The Dark Knight” certainly point the company to the right direction.